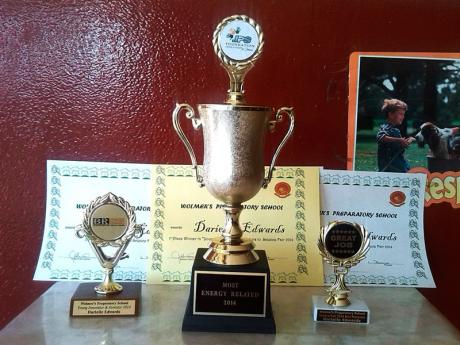 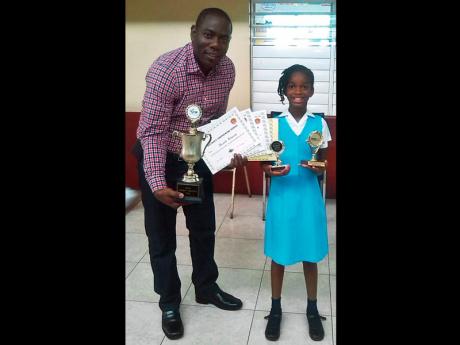 Wolmer's Prep student Darielle Edwards shows off her awards and certificates from her school's Young Innovators and Inventors Competition, with the help of JPS field services manager, Renaldo Chambers. Edwards placed first in grade five, was judged Best Presenter, won the Most Energy Related (project) category, and claimed the overall top prize as competition winner. Chambers was one of two JPS Foundation energy mentors who assisted Edwards with her project for entry in the Most Energy Related category. That competition was a highlight of the school's Annual Science Fair, which was held on April 30. - Contributed
1
2

The 10-year-old lights up when speaking about the subject, which she loves because it allows her to try new things and discover how the world works.

"Science is fun! I get to try experiments and you can learn how to change an old thing into modern gadgets," she said. Driven by this passion and curiosity, in 2012 when Darielle Edwards was in grade three, she first entered her school's Young Innovators and Inventors Competition, a highlight of the institution's Annual Science Fair. That year, she won first prize for her grade and was recognised as Best Presenter for a volcano she created. She again entered in grade four, producing a water cycle for which she also won first prize for her grade and the Most Creative prize.

But her most recent entry has propelled her to being viewed as a little science genius at school. Now in grade five, Darielle swept aside her competitors recently, to claim the overall top spot and several other category prizes with her hydro-electric power supply solution at the annual event.

"In class, we were talking about energy, and I thought it was a good idea to do something in energy for the science fair," she explained. "So I chose to focus on hydropower, which is the form of energy that most excited me." Darielle also received the JPS Foundation Most Energy Related Trophy, was voted Best Presenter and placed first for her grade. The young dynamo, who describes herself as "competitive", notes that the project was not the easiest to undertake and she was challenged in several ways.

"It was difficult for me to attain the right elevation so that the force of the water was enough to turn the turbine and spin the motor to generate electricity," she said. "It was also a bit challenging to get the right amount of tension from the rubber bands." However, she had the full support of her mom, Charlene Levy, Levy's co-workers and family friends. Darielle also benefitted greatly from expert technical guidance from two JPS engineers, Renaldo Chambers and Courtney Brown.

"I wish I had more time with them, but I got great advice which was beneficial," she said. Chambers and Brown, volunteer energy mentors at the JPS Foundation, were impressed with Darielle. Brown said she was very intelligent and enthused about her idea while Chambers shared that Darielle's passion towards science and energy was inspiring.

"Her appreciation shown to the help that was offered was also quite humbling for me," he said.