Wily Eastman too tough for Hylton 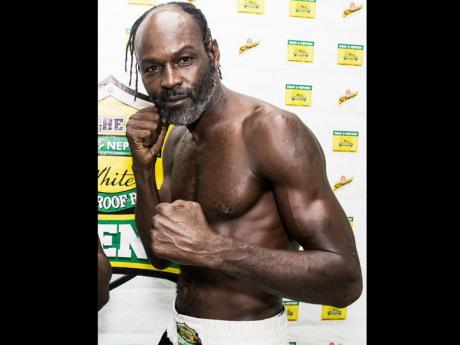 Eastman ... methodical in his approach. - file

Although he lost to Howard 'The Battersea Bomber' Eastman on points, Kevin 'Bus Boy' Hylton earned high praise from spectators at the Chinese Benevolent Association on Wednesday night, as he gave a better-than-expected performance, and forced Eastman to work hard for victory.

At the end of the six-round contest, judges Clifford Brown and Keith Brown scored it 58-54 and judge Stephen Hodges had it 58-52 for Eastman.

Though there was a wide age difference between the boxers, Eastman 43 and Hylton 34, the early predictions were that Eastman would have won by knockout.

This was so because he had an impressive knockout record going into the fight, 38 in 48 victories.

Hylton was, however, at his defensive best, and between taking shelter behind a tight guard and smothering his opponent's punches, he was able to take the fight the distance.

He was knocked down twice, first in the second round, from a hard right hook to the head, and again in round four, but this time from an illegal punch to the back of the head, for which Eastman was penalised a point deduction, by referee Eion Jardine.

Eastman was confident as the fight started and, as customary, was methodical in his approach. Hylton moved a lot in this round but, whenever Eastman got close to him, held on with a vice-like grip.

The second round saw a lot of movement on the part of both boxers, as Hylton retreated or clinched, but Eastman was still able to score with a few hard punches to head and body.

One of these headshots saw Hylton going down for the count. He complained to the referee that it was an illegal blow, but the referee did not buy his argument.

In the third round, Hylton was able to land a few hard left hooks, but Eastman did not seem bothered and soon launched his own counter-attacks.

He scored freely in this round. When Hylton tried to clinch him, he pulled away and went back on the attack. He won this round comfortably.

Eastman continued to attack in the fourth while Hylton used his foot speed to get himself out of trouble. On one occasion, as he retreated, he was caught by a right hook to the back of the head and went down complaining.

The referee agreed with him on this occasion, and deducted a point from Eastman for the infringement.

From that point, it was a matter of survival for Hylton. He threw some wild punches, no doubt trying to score a knockout, but Eastman ducked under them and countered with jabs, hooks and uppercuts.

The final round saw Hylton digging deep to last. He was a very tired man when the long-hoped-for final bell was sounded.

At the end, it was Eastman who had booked himself a place in the semi-finals, the second man to do so. Last week, Tsetsi Davis earned his spot by defeating Ramel Lewis, also on points.