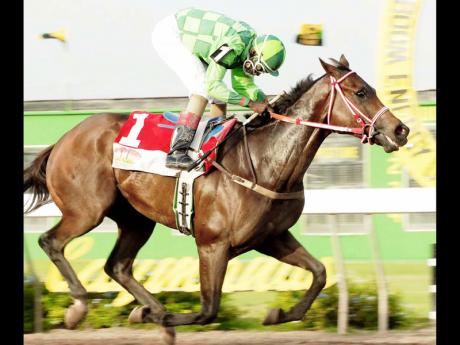 A nine-race programme, featuring the Labour Day Trophy over 1200 metres and the inaugural running of the Mark My Word Trophy for open-allowance horses over 1820 metres, is on at Caymanas Park today. Post time is 1:10 p.m.

The Mark My Word Trophy, run in honour of the 2010 Triple Crown winner and Horse of the Year, who died in 2013, has attracted seven starters, including last year's Superstakes winner, TYPEWRITER, who goes for his first win from two starts this season and, by virtue of his proven class, should defy topweight of 57.0kg.

Similar to MARK MY WORD, who, in addition to the Triple Crown, won the Superstakes twice for trainer Richard Azan, TYPEWRITER, in every sense, is a big-occasion performer, the five-year-old son of Western Classic - Docs' Paladin having won the Derby and St. Leger in 2012.

After losing to Gold Cup winner COMMANDING CHIEF over 1400 metres, on his April 26 seasonal debut, TYPEWRITER has been primed for today's encounter. Trainer Spencer Chung has taken him to task at exercise. Venturing over two turns, which he relishes so much, looks hard to oppose with customary rider Shane Ellis in the saddle.

CUT ABOVE THE REST

TYPEWRITER looked real sharp at exercise on May 13, galloping five furlongs in 1:00.1. He is clearly a cut above the open-allowance level. With his long-term objective being a second Superstakes win in November, an anticipated clash with PERFECT NEIGHBOUR, who he beat last year, should prove too strong for stable-companion GO GO YVONNE. I am expecting him to assume the lead, leaving the half mile, and win with a bit in hand.

With much recent form present among the likes of recent winners REASONABLE PRESS, SUNLIGHT EXPRESS and TRAIL BLAZER, MERU, LET THE CAT PURR and hat-trick seeker LIGHT BRIGADE, it could be an interesting contest.

However, sparingly-raced 4-y-o gelding ROCK UNION truly impressed when winning over the straight in restricted company, following a nine-month absence in March, and having trained well in preparation for this race, is tipped to repeat as he could well be a cut above this level.

ROCK UNION, who is conditioned by Anthony 'Baba' Nunes, should win from the stretch-running filly, LET DE CAT PURR, who has been a model of consistency.

I also like PLAY STATION to go one better in the first race, down-in-class AWESOME MARQUE to rebound in the second, as well as DIOR in the sixth and GOLD RUNNER in the ninth and final.