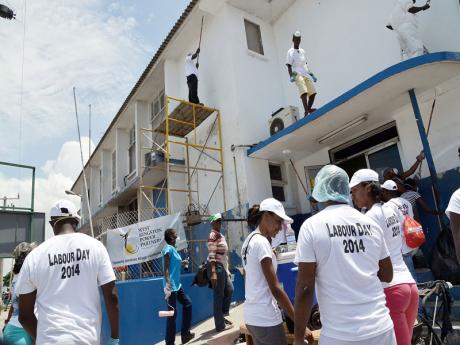 Residents of Denham Town in Kingston turned out in their numbers to help give the police station a facelift yesterday.

The Denham Town Police Station has often been the flashpoint of the tempestuous relationship that existed for decades between police and residents from that west Kingston community.

Claims of extrajudicial killings and police brutality have triggered some explosive confrontations between the two sides, some of which resulted in heavy and sustained gunfire on the police station.

But all of that was a distant memory yesterday as scores of residents - armed with brooms, paintbrushes and machetes - joined employees from the West Kingston Power Partners to give the station house a complete makeover on Labour Day.

There were refreshments and plenty of laughter as they set about improving the working conditions for the police officers whose actions they have not always agreed with. For some who braved the heat, it was an opportunity to bury the hatchet.

"We want to break away from the stigma of the police being seen as the aggressor. We want to work with the police to show that we can get things done," said Carlisle Brown, a Denham Town resident.

Asserting that the police were there to help, Brown underscored that his community and the police can enjoy a good relationship.

It was a view shared by Senior Superintendent Steve McGregor, commanding officer for the Kingston West Police Division, who called the commingling of residents and police personnel "a new dawn" in the relationship.

West Kingston Energy Partners' chief executive officer, Wayne McKenzie, said this was one of the things that influenced his company to get involved in the project.

"We are pleased with the overwhelming support of the community, and we are hoping that this will lead to a better relationship with the residents," McKenzie said.

McGregor said the actions of the residents did not come as a surprise to him because the police have been seeking to mend fences with the community.

"The people are opening up to the police. They are more receptive to what we are doing and we are going to make west Kingston a model for the rest of the country," he said.

McGregor, who took over as head of the division last year, confessed that he was discouraged by the conditions at the station, but said the facelift would create a better working environment for the men and women under his command.