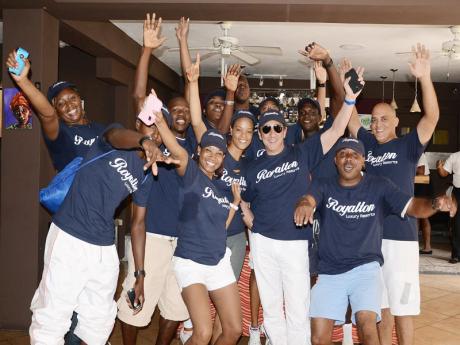 The first-ever Flow/Montego Bay City Run is done and dusted after Sunday's first outing, which saw thousands of the city's people coming out to watch, and in many cases, take part in the special event designed to raise funds for tertiary-level students from institutions across St James.

So huge was the outing that organisers are already thinking of hosting a bigger run next year.

"We definitely have to be thinking about that because based on what we saw here, it is clear that next year and the years to come will get even bigger support," declared Janet Silvera, chairperson of the MoBay City Run.

The RIU hotel group, with 262 participants, was rewarded for having the largest corporate group, while Scotiabank took second place, with 150 of its members participating.

RIU Montego Bay and RIU Jamaica general manager, Frank Sondern, said his team will be much bigger next year.

He said that the MoBay City Run has established itself as a great event after its first staging, citing it as a great charity experience which mixes health, recreation, and fun for those taking part and those looking on.

"There can be no doubt that we will be back next year," Sondern said. "It was a such a great experience for us that days later, many of the people from our team were still talking about it.

"At RIU, we wanted to show our support, so I had to get everyone together, especially as it was for charity," Sondern said.

Title sponsors Flow also had a huge number of people on show, with the Royalton hotel punching above their weight with a delegation of 25 participants, but still turning heads as one of the more visible teams.

"We only had 25 people as we are a pretty young hotel here, but next year, we are going to double the number of participants. We believe in giving back, and so we jumped at the opportunity to lend our support to the MoBay City Run," said Kerry-Ann Casserly, sales and marketing manager at Royalton.

"At Royalton we care, so supporting a worthy cause such as this will always be of major interest to us," Casserly added.

Sharnon Williams won the men's 10K race in 39 minutes and one second. Kenroy Jonson was second, and third went to Leroy Daley. On the women's side, first place went to Karlene Blagrove in 42.48. Julie Maille took second place, and Rainforest Seafood's Alison Sutherland was third.

Horace Bury of Linstead, St Catherine, won the 5K race, taking the top spot in a time of 20.29. Second went to Jordane Black of Vista Print, while RIU hotel's Mario Harrison was third.

The women's 5K race was won by Jill Stewart ahead of Christina Samuda, while Ciska Haynes was third.