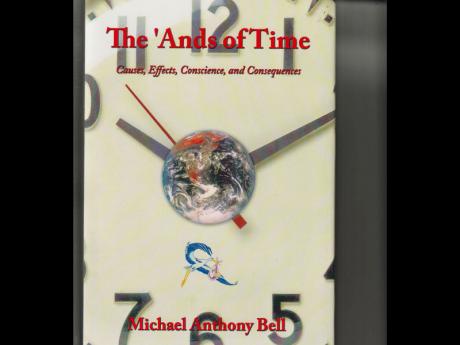 Title: The 'Ands of Time: Cause, Effects, Conscience, and Consequences

Whether it's Einstein's relativism, Higgs boson, or Heisenberg's theory, the reader, if unfamiliar or disinterested in time-matter continuum, is left unattended and potentially lost for good.

No doubt, Bell has his reasons for cloaking, at least initially, this sociological narrative in scientific terms. Crime in Jamaica is a theme that has had its fair share of commentary. Bell must hold our attention, hence his unconventional style.

And it works for the most part.

Cause and effect, sociological correlations and the timelessness of impacting deeds, best depict a society lost in an abyss of despair and hopelessness - the proverbial black hole of no return.

The 'Ands of Time is fiction etched in reality. Jamaican society, circa 1970s, is painted on a rotting canvas, where swarming vultures in places, high and low, leave for dead the defenceless and the weak.

Bell is descriptively vivid. Words are used and reused - in varying expressions, languages, and style, for maximum effect.

Arguably, it exceeds redundancy, tiring the reader at intervals. Then again, his language can be emotive, crisp and imaginative, rivalling the very best in the business. At the end of the day, Bell needs to be heard. The world needs to know the potential depravity of the human mind.

Bell serves as a physicist, social critic and activist. His words are exhortative and biting. He probes, conjuring conspiracies in the process. He impugns the duplicity of politicians and questions the authenticity of the clergy.

"At the end of it all," he writes, "the politicians are just the front men for the haves. They reinforce the exploitative ideological superstructure and the status quo."

And of the clergy, he is equally scathing: "The pastor should portray a loving God, Creator of all things, beautiful, bright, and upright. The pastor rules his congregation with heresy hunting and fear of future judgement, fear of brimstone and fire ... Nowhere in his pew is there any love for the have-nots in this lifetime.

They will get their reward when they are gone."

Interestingly, though, with the novel on the brink of derailment, Bell abruptly switches gears, from the complexity of scientific theorems and pontificating to the reality of existence in a warped society.

For sure, the reader is jolted as Bell resurrects his narrative from a gnawing labyrinth. And what follows is sheer brilliance. Bell presents a Jamaica that is in political tatters, boiling over with vitriol. It is a hotbed of insurrection and wanton disregard for life. No one is spared the wrath of hooliganism, even the iconic Bob Marley.

Bell introduces an assembly line of dons: Barsky, Curly Cat, Blax, Fang and others, who control Travoli and Concrete Gardens with ruthless abandon. They are the community leaders, the de facto governors of their fiefdoms, carved out along political lines. This is art mirroring life. This is a psycho drama of duplicity, prurience, paternalism, the aphrodisiac of violence, orgiastic vengeance, corruption and the exploitation of innocence.

"The 'Ands of Time weaves a tableau of lost potential, poverty, hopelessness, the archetypal nature of fragmented societies, generational curses, and even the blight of superstition. The transformation of the protagonist, Colin Hamilton, from an assiduous worker to a stealthy, cold and clinical assassin seeking revenge for an assault on his family and his near death, is chronicled without pretension.

Bell delivers the exploits of Colin - aptly assuming the moniker of the 'vampire-like' Barnabas Collins, in an exigent and almost pedestrian fashion - a far cry from the highly technical, verbose and literary excess seen earlier. The eerily similar exploits of Colin's brother, Devon, are narrated in like mode. It is a style that works for Bell as The 'Ands of Time finally erupts as a veritable page-turner, sprouting a fusillade of dizzying twists and turns.

It ferries the reader through the intrigue of the transnational drug trade, law enforcement, geopolitics, and the demise of once-invincible kingpins. How this plot unfolds is anyone's guess. Then again, Bell might have shown his hand when he admonishes, "Nothing can save you from the effects of your cause and action, and from the consequences of your action, and from the consequences of those effects."