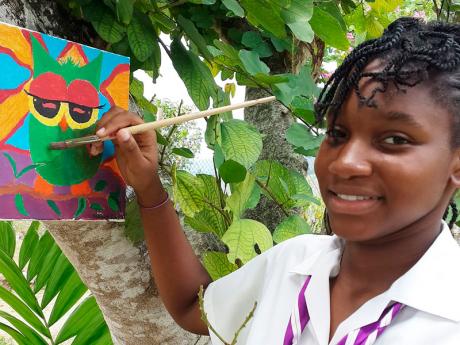 On the surface, Danielle Mullings is a typical teenager. You watch her buoyancy on the basketball court; you are witness to her athletic prowess and competitiveness.

Precisely what you would expect from someone her age. But this 14-year-old Campion College student has a lot more going for her.

She is the consummate artist who has humbled the strongest competition, having won the $25,000 prize for photography at The National Exhibition for Art and Craft in Schools. Yet, she remains well-tempered. Her work is slated to be featured at the upcoming Liguanea Art Festival.

Of the process involved in creating one of her many pieces, she talks about the night's stillness. "I am most creative then. I am a night owl," she quipped.

"Sometimes I wake up with an idea or concept that I immediately put on paper, then I go back to sleep. That way, I don't forget what I must develop on. But, really, ideas flow when I am very relaxed. Music can also put me in a creative state."

Mullings said, "Nothing could have been done without that breath of life that God gives us."

One can draw many similes - she is poised, mature, and philosophical. She is innately dualistic, coy, and reticent, at times, and she welcomes quietude. Conversely, she is ably social.

Her achievements were long in the making. She began honing her craft under the guidance of her grandmother, Maple Gallimore, a one-time art teacher at Marcus Garvey Technical. "She has to be credited for everything that is happening now," she said.

It was Mullings' grandmother who coached her in the fundamentals of painting and drawing, even purchasing her first canvas, and passing on timeless knowledge of making paint from cedar tree sap, red dirt and water.

Her parents are also involved in her grooming. "My father takes me to many galleries, including the National Art Gallery, and my mother gives me that extra push and advice on how I can improve on my work." She showered praises on her teacher, Nicholas Barrett, and her colleagues whose work she admires.

Although one tends to loosely use the word "prodigy" to describe rising talents, one would be hard-pressed not to conjure that term after spending some time with Mullings.

Artistically, she's adept at surrealism but prefers to be called a photographer. It is a testament to her versatility. "This is my strongest strength. I am very instinctive. I walk around, sensing my environment and its natural beauty. I started taking pictures, random at first, but later I began to specialise."

She uses the words "uplifting", "deep", and "vibrant" to define her work.

Interestingly, it is information technology that most appeals to Mullings from an academic standpoint. She described herself as a "tech junkie". Coupled with her keen interest in history, she is quite the complete student.

That this young national has a stellar future before her is an understatement. Indeed, second-guessing Providence is never advised.

"I plan to be involved in engineering. I think my artistic skills will create designs that simplify people's life," she says.