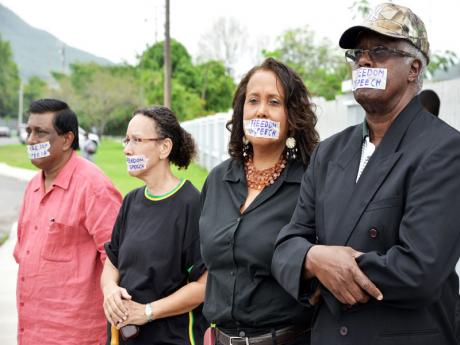 Protesters in front of the UWI Mona campus in support of Professor Brendan Bain, who was fired from his post at the campus.-Norman Grindley/Chief Photographer

Supporters plan more protest for tomorrow, but lobbies say it's a waste of time

With battle lines drawn and neither side seeming ready to back down, the furore over the sacking of Professor Brendan Bain is expected to continue tomorrow with a picketing of the University of the West Indies (UWI) Mona campus.

But Dr Carolyn Gomes, executive director of the Caribbean Vulnerable Communities, which is one of the more than 30 lobby groups that sought Bain's removal, is arguing that the protest will be futile, as the university had no option but to relieve Bain from his duties as head of the Caribbean HIV/AIDS Regional Training (CHART) Network.

"One of the things that we carefully did was to keep it out of the media, because it has been playing out for nine months. We did so because the media is not the most healthy place to have a rational discussion, but it was brought into the media," Gomes told The Sunday Gleaner yesterday.

She charged that much of the public comment on the matter has been uninformed, and argued that the print media in particular, including The Gleaner, have been horrible in the reporting on the matter.

She said although CHART's mission statement did not specifically say that its head must support the repeal of buggery laws, that was a given, and Bain was aware of this.

Efforts to contact Bain have so far been unsuccessful, and persons close to him said they do not believe he had any such understanding.

The Bain supporters have organised an email campaign calling for him to be reinstated, and have reportedly managed to get nearly 2,000 individuals to write to UWI Vice-Chancellor Professor E. Nigel Harris urging the university to reverse its decision.

But Gomes said Bain was involved in the crafting of the framework for the Caribbean Regional Strategic Framework on HIV/AIDS which calls specifically for the repeal of the buggery laws.

"It is not out of the blue. This is settled HIV stuff. It is Caribbean policy, it's international policy," stated Gomes.

She said it is selective rubbish from those who argue that because the matter was not clearly stated, Bain did nothing wrong.

Bain, the retired university professor, was dismissed from CHART after a campaign by a coalition of lobby groups upset over expert testimony he provided in a constitutional challenge brought by a gay Belizean man against that country's criminal code in 2010.

Caleb Orozco, a gay man, challenged the constitutionality of an 1861 law that criminalises men having sex with men.

Orozco was reportedly helped by regional groups, including the University of the West Indies Rights Advocacy Project (URAP).

"This has caused a split on the campus (Mona) as persons who support the sacking and those opposed to it have daggers drawn," said a lecturer at the campus who asked not to be named.

Efforts to contact a representative of URAP were unsuccessful yesterday.