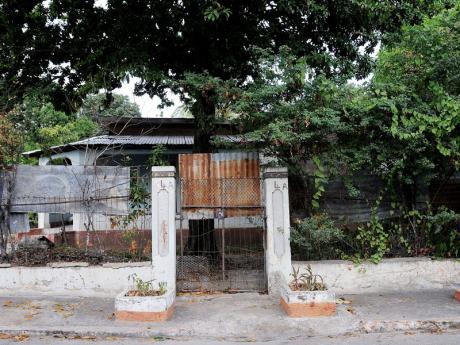 The property at the centre of the dispute on Upper Ivy Road in south St Andrew.

A squatter who had threatened to file a claim for $50 million against the owner of the property he is squatting on has been given 30 days to leave the place,

The court last Monday agreed to extend an order issued in 2011 for Michael Gardine to vacate the property on Upper Ivy Road in south St Andrew by June 19.

"And we fully intend to have the warrant executed by that date," attorney-at-law Sherene Golding Campbell told The Sunday Gleaner.

Golding Campbell noted that the property owner has been trying to regain control of the property since 2003, three years after Gardine moved in.

She noted that the court issued a consent order in 2003 that Gardine should vacate the premises but this was not done.

The property owner, whose name is being withheld, returned to court in 2011 and another order was issued for the squatter to leave the premises but that was also ignored.

But Golding Campbell said the property owner is determined to act this time around.

When our news team contacted Gardine last year, he claimed that he would be suing the property owner for $50 million for all the work he had done on the property and the duress he suffered during the titleholder's attempts to have him removed.

He said he was seeking to recover "the value of converting the abandoned, crime-infested building into a liveable and tradeable property ... it involved taking immense personal risks and stress, as well as personal investment on the property".

"So I am instructing legal representation to file a claim in the Supreme Court, outlining the peculiar circumstances and circumstantial evidence surrounding the 13 years that I have been in occupation, and the adverse conditions that apply," added Gardine.

But Golding Campbell said that claim has not been served on the property owner.