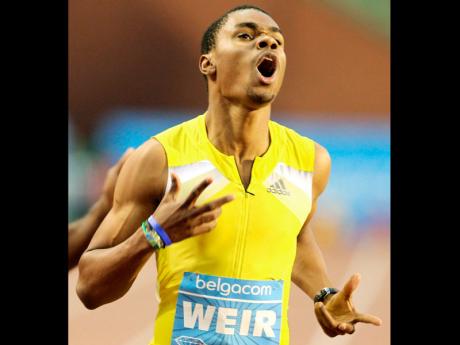 NASSAU, The Bahamas:Thousands of black, green and gold-clad Jamaican supporters transformed the Thomas A Robinson Stadium into a carnival atmosphere, as the island flexed its relay muscles on the opening day of the inaugural IAAF World Relays, with one gold medal in world-record time and a silver medal.

In the highlight of the night, Jamaica's team of Nickel Ashmeade, Warren Weir, Jermaine Brown and a monstrous Yohan Blake on the anchor leg, erased the Carl Lewis-led Santa Monica Track Club's 4x200m world record (1:18.68), stopping the clock at 1:18.63.

St Kitts and Nevis, 1:20.51 took the silver medal ahead of France, 1:20.66. The USA were disqualified for a baton exchange outside the zone.

The Jamaicans added to their tally, securing silver after a poor last exchange in the women's 4x100m in a time of 42.28, finishing behind the United States, 41.88 with Trinindad and Tobago third in 42.66. They will be taking aim at a further five medals on today's final day of competition.

Blake was extremely pleased with the world record in the men's 4x200m.

"We knew we could come here and get this medal and record, and it feels very good even though I think we could have gone faster," Blake said.

"The guys were great, I really wanted to be involved in a world-record run and I'm happy that I was able to contribute," added Weir.

Ambitious eyes will also be laid squarely on a medal in the women's 4x400m final with the Jamaicans looking impressive in qualifying, securing their chance with the experienced Novlene Williams-Mills to be added to the line-up.

The team of Christine Day, Anastasia Le-Roy, Shericka Jackson and Kaliese Spencer stopped the clock at 3:24.95 to finish behind the United States and book their lane in tonight's 4x400m final. Great Britain and Northern Ireland were third in 3:23.84. The women's 4x400m final starts at 5:25 p.m.

In the men's equivalent, try as he did, Rusheen McDonald could not pull back Christian Taylor at the line as the USA, 3:01.09, escaped with a narrow win. The Jamaicans also secured a spot in today's final (6:52 p.m.), with a 3:01.17 clocking for second place in an entertaining heat. McDonald had Javere Bell, Edino Steele and Dane Hyatt for company, as France finished third in 3:03. 74.

The 1:30.23 minutes set in 2001 is the fastest time ever recorded by a Jamaica national team in the women's 4x200m and the team, which will be selected from Anneisha McLaughlin, Samantha Henry-Robinson, Sheri-Ann Brooks, Simone Facey and perhaps Fraser-Pryce - if fit enough, will be looking to top the medal podium and lower that mark in the 7:11 p.m. final.

Earlier in the men's 4x200m heat, the Jamaicans, with a quartet of Rasheed Dwyer, Jermaine Brown, Jason Livermore and Warren Weir on anchor, set the second fastest time by a national team in the event, crossing the line in 1:20.15.

The women's 4x100m team was also pretty impressive in qualifying for the final earlier in the afternoon, posting 42.29 with Russell, Stewart, Schillonie Calvert and Samantha Henry-Robinson handling the stick.