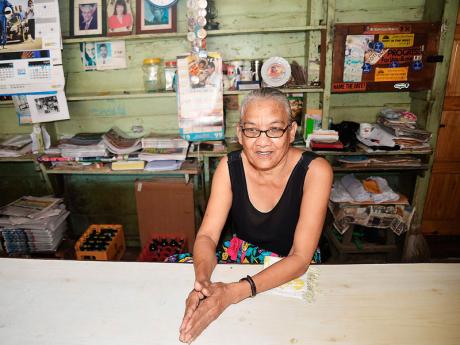 WHEN GRANGE Hill residents meet to discuss politics and other current events or simply just to enjoy a game of dominoes, their place of choice, which guarantees them warm hospitality, is Pansy's, located along Main Street in the town.

Pansy's started operations in 1964 as a family-run business, and in 1967, the establishment became the first supplier for The Gleaner in the town centre. Being the eldest of seven girls, Pansy Williams said she was hand-picked by her mother to become the primary shopkeeper.

Over time, her siblings would move on to other careers, but Williams remained in the business. She said one of her high points is selling The Gleaner.

"I'm so engaged in the selling of The Gleaner all these years, it has now become a part of me ... . I usually awake from 5:30 in the mornings to prepare my shop so that when The Gleaner makes its delivery, my shop is open and ready for sales," Williams said.

"The people of Grange Hill depend on me for The Gleaner as I have been selling it since 1967, so everyone associates Pansy's with The Gleaner," she added.

Though no longer the sole vendor in Grange Hill for supplying The Gleaner, Pansy's still maintains its status quo as being the go-to shop for the Caribbean's oldest newspaper so much so that the town's people have renamed the establishment 'The Gleaner Shop'.