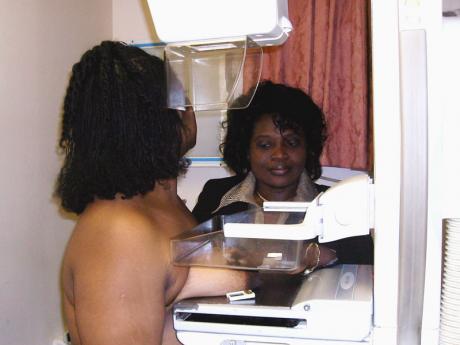 A mammography in progress. - FILE

As part of its 125th anniversary celebrations, Scotia Foundation is ensuring breast health for women who live in Montego Bay. The bank is encouraging them to sign up for the free breast cancer screening at Scotiabank Ironshore on Thursday, May 29.

As part of its milestone anniversary celebration, Scotiabank has reinitiated a campaign to encourage breast cancer screening through the mobile mammography programme. Provided in association with the Jamaican Cancer Society, at no cost, sessions have so far been held at Scotiabank branches at Liguanea, Hagley Park Road and St Ann's Bay.

With the continued rise of breast cancer victims in the island, Scotiabank, through its Scotia Foundation, has over the years made a concerted effort to help women manage their breast health. In 2000, to address the health needs for breast cancer screening of women in isolated and rural communities, the Scotia Foundation donated a fully equipped state-of-the-art mobile mammography unit to the Jamaica Cancer Society. In addition, through the Scotia Employee Volunteer Program, there is also participation in Relay for Life and Pink Day, from which the bank invariably raises significant amounts to be contributed to the society.

Scotiabank Ironshore will be the fourth and final session. Only 30 persons can be accommodated per session and, according to the organisers, there are always more customers requesting the service than there are available spaces. To date, more than 90 women have been screened.