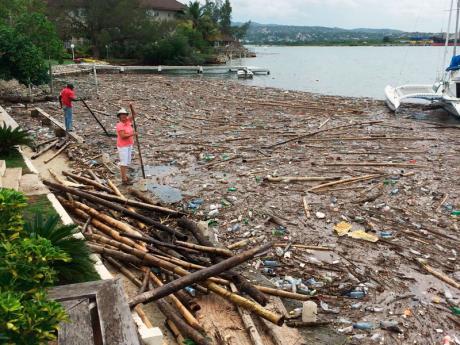 The condition at the Montego Bay Yacht Club, showing some of the garbage that is washed into the harbour, most of which will get caught up on reefs or end up on beaches downstream. This was the scene at Montego Bay's harbour last Monday. - Photo by Janet Silvera

Last Monday, following the torrential rainfall in Montego Bay, thousands of plastic bottles littered the beachfront of the tourism capital, many finding their way to the seabed.

This has become the norm, says one man, whose company is spending millions of dollars to sensitise primary-school children in western Jamaica about how to restore, conserve and protect the environment.

Montego Bay businessman and chairman of Caribbean Producers Jamaica, Mark Hart, in collaboration with the Montego Bay Marine Park has launched the Care and Protect Jamaica (CPJ) programme with 12 schools in the parish of St James.

"We are living in an age of consumable, disposable material which is destroying the environment," said Hart, noting that taking responsibility for the future now, was critical.

"When it rains, and the garbage comes out of the gullies, there are tens of thousands of plastic bottles that engulf the bay, which is one of our greatest assets," he stated.

"The project seeks to encourage plastic bottle collection programmes in the schools, encouraging all students to be more responsible with how they dispose of their garbage. The bottles are then sold to Jamaica Recycling Company," says Joshua Bailey, education and outreach officer at the Marine Park.

According to Bailey, the schools are trained in proper garbage disposal and are made aware of the gravity of the problem of marine litter.

Last year in less than four hours, during Earth Day, some 607 pounds of garbage was collected from beaches in the tourism capital, he revealed, adding that 500 pounds were recovered from one beach. "Garbage that sunk and covered our reefs," Bailey said.

The CPJ programme, which runs from January to June in the first six months, then continues for a year, is sponsored at a cost of $1.5 million, but the money is not important to the sponsors, who say the project is endorsed by the National Environmental and Planning Agency.

"We will continue our commitment to this initiative as long as the Marine Park is active, in order to build awareness and protect our environment," was the commitment from Hart.

For him, the attitude of the people in the west must change and if he and his team can't reached the adults, the next generation must do the job.

"The ocean gives us so much recreation, food, and supports the lifeblood of Montego Bay and tourism. People come to explore the beaches and reefs and the sea life that lives within that habitat," he argued.