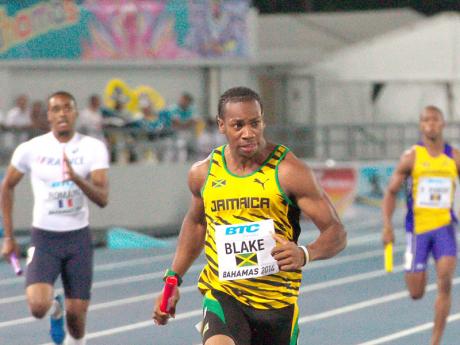 Yohan Blake powering past the finish line on Saturday night in the men's 4x200 metres final at the IAAF World Relays in Nassau, Bahamas. Jamaica won the event in a world-record one minute 18.63 seconds. - Ridley Ingram photo (Contributed)

There was disappointment in the men's 4x400m, and the women's 4x200m quartet was not able to oblige, but Jamaica's men's 4x100m team ensured that the island closed the show on a high at the IAAF World Relays.

Winners of the men's 4x100m at every major championships since the 2008 Beijing Olympic Games, the Jamaicans, running without both Usain Bolt and Asafa Powell for the first time since their reign started, eased to a 37.77-second win inside the Thomas A Robinson Stadium.

Michael Frater was nowhere to be seen as Nesta Carter, Nickel Ashmeade and Julian Forte shared the responsibility of maintaining Jamaica's dominance at the event, ensuring that theirs would be the first names registered as world 4x100m relay champions.

While the Jamaicans celebrated their win, the absent Americans were left to once again ponder their shortcomings, after a disqualification in the heats. Over the past 10 major championships in the men's 4x100m, team USA has had five disqualifications, three silver and two bronze medals.

Shelly-Ann Fraser-Pryce, who had been a doubt because of injury concerns, was a shade of herself in the women's 4x200m, as shaky baton exchanges haunted the team into third place despite a national record 1:30.04 behind winners the USA - who swept all female finals on the day - 1:29.45, and Great Britain and Northern Ireland, 1:29.61.

Simone Facey, Sheri-Ann Brooks and Anneisha McLaughlin were the other members of the team.

The first podium finish actually came earlier in the women's 4x400m final, as the Jamaicans, with the pedigree of three-time Olympic and seven-time World Championships medallists, took second place, with a mixed squad that featured 19-year-old Shericka Jackson on anchor.

Kaliese Spencer led the team off, passing to Novlene Williams-Mills, before Anastasia Le-Roy took the stick to Jackson, in a line-up that looked to put early pressure on the Americans.

"I'm so proud of these girls, especially Shericka Jackson, who came out here and gave a brave performance as a youngster. It shows how deep our quarter-mile programme is," said Williams-Mills.

There was disaster for Jamaica in the men's 4x400m final as a mix-up on the first exchange between Dane Hyatt and Chumaine Fitten took the Jamaicans out of the contest, which was won by the USA, 2:57.25, on the back of a classy LaShawn Merritt anchor leg ahead of hosts The Bahamas, 2:57.59, and Trinidad and Tobago, 2:58.34.

The Jamaicans actually crossed the line in eighth place in 3:10.23.

Earlier, there was high drama in the men's 4x100m heats. While the Jamaican team of Nesta Carter, Kemar Bailey-Cole, Julian Forte, and Andrew Fisher qualified with the fastest time, 37.71, the United States failed to progress after exchanging outside the zone. They had crossed the line in fourth place in their heat anyway in a time that would not have given them a spot in the final.