Carl Lewis? He talks a lot ... Jamaica stars fire back at American after breaking his 4x200m WR 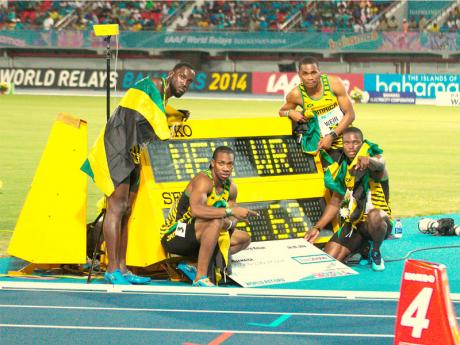 Members of the Jamaican quartet which set a world record 1:18.63 in the 4x200 metres at the IAAF World Relays in the Bahamas at the weekend. From left: Nickel Ashmeade, Yohan Blake, Warren Weir and Jermaine Brown. - Ridley Ingram photo (Contributed)

Minutes after breaking the record set by his Santa Monica Track Club in the 4x200m in 1994, Jamaican stars Yohan Blake and Nickel Ashmeade had some strong words for American sprinting legend Carl Lewis, who recently restated his doubts around the island's drug testing programme.

Blake also dedicated the win to the memory of nine-year-old twin boys Brandon and Brayden Jones, who drowned last week in Montego Bay.

Several days ago, Lewis told reporters in India that he felt vindicated by comments he made in 2008, criticising Jamaica's anti-doping efforts and questioning the credibility of its athletes, after Asafa Powell, Sherone Simpson and Veronica Campbell-Brown were embroiled in doping cases. Campbell-Brown has since been cleared of any wrongdoing, while Powell and Simpson are challenging 18-month bans.

The Jamaicans lit up the Thomas A. Robinson Stadium in Nassau, The Bahamas, last Saturday night, erasing the 20-year-old record of 1:18.68, stopping the clock at 1:18.63 in the men's 4x200m final at the IAAF World Relays.

With 200m world record holder Usain Bolt missing from action, the quartet of Ashmeade, Warren Weir and former Bridgeport student Jermaine Brown - none of whom featured on any of Jamaica's 4x100m world record teams - along with Blake, now a relay world record veteran after 4x100m marks at the 2011 World Championships and the 2012 London Olympics, showed that they didn't miss the big Jamaican this time around with a jaw-dropping performance.

For Blake, who reportedly split 19.00 seconds on his gap-stretching anchor leg, the win and the world record was made even more special by the fact that the previous mark belonged to a team anchored by Lewis, with the 2011 world 100m champion dismissing the American's comments.

"He (Lewis) has been talking a lot of smack. Even the other day in India, he said some things about Bolt, but we know we are clean, and we know we are good for the sport. We feel like we always have something to prove. We are taking all his records. There is no more for him," Blake told The Gleaner.

Ashmeade added: "I'm a guy of a few words, but Jamaica is a team of depth. We prefer to speak with our feet, not our mouths."

Blake went on to hail the team's performance and noted that he was saddened by the recent death of the two youngsters.

"I am feeling great, awesome, and I'm really happy to be back on track. The team did a wonderful job - 1:18.63 - and I think it could have been faster, but we are thankful," Blake said. "I want to dedicate this race to the two little boys that died in Montego Bay the other day. Really, I want to wish condolences to their mother and family. I'm really sorry for the loss."

Weir was elated to be making his first world-record contribution.

"To get a world record - and especially here, in The Bahamas, in the Caribbean - is wonderful. People will definitely remember that the 4x200m world record was set by Jamaica at the first IAAF World Relays," said Weir.

"We have four excellent guys who all did very well today, and we managed to get the world record, so I'm very happy about that," Ashmeade chipped in.

Brown was also pleased with the result and is now hoping to use it as another platform for the remainder of the season.

"I was really excited in the first round, and felt we could have gone for it from then. But we took it easy, and the guys welcomed me. Hopefully, I can continue my season and come and do something special at trials," Brown said.

Prior to the Jamaicans' vic-tory, teams from the United States were responsible for the 10 fastest times in the history of the 4x200m relay, with Lewis' Santa Monica Track Club posting four.