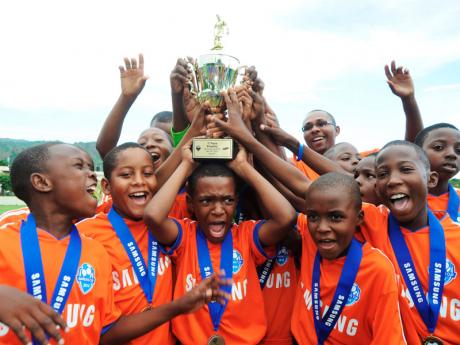 Members of the Quest Preparatory team hold aloft the Samsung Youth Cup for Kingston after defeating Mona Preparatory 3-0 in the final at the University of Technology playfield last Saturday. - Jermaine Barnaby/Photographer

It was an all-prep showdown in Saturday's final at the University of Technology's (UTech) Football field, where Quest Prep copped the coveted trophy and elite title of Samsung Youth champions of Kingston 2014.

Errol White, the coach of Quest, who blanked Mona 3-0 in the final, said: "I am speechless. The boys put in a lot of work, but it all came down to team effort." Rivaldo Mitchell netted a goal in the final and 16 overall to become the competition's all-time top scorer.

"I feel good. I was disappointed from last year. I feel good that I broke the record and our team won," Mitchell said.

Additionally, Quest Prep's victory was inspired by Jaheim Rose, who scored twice and had one assist to help carve out the victory. "I was overwhelmed to score today. It was a joy to help my team win," he said.

"Goals win games, and we failed to score in the final. They scored three unanswered goals, and after that second goal, we just dropped our shoulders a bit and lost composure," he said.

Quest Prep will now await the winners of the rural area in Montego Bay this weekend to determine who will be crowned all-island champions for the Samsung Youth Cup, and win with it the US$10,000 in prizes.

McCauley Primary and Mona Prep played to a 1-1 draw after full time. In the penalty shoot-out which followed, Mona Prep emerged 5-4 winners.

McCauley Primary reached the semi-finals courtesy of a 5-1 victory over Manchioneal Primary. Oshane Wright scored a hat-trick, while Tamish Richards and Jaheim Reid scored a goal each. Marlon Pennicook scored for the losers. Mona Prep then edged Portsmouth 1-0 for the last semi-final spot, with the winner coming from the boot of Carson Rose.