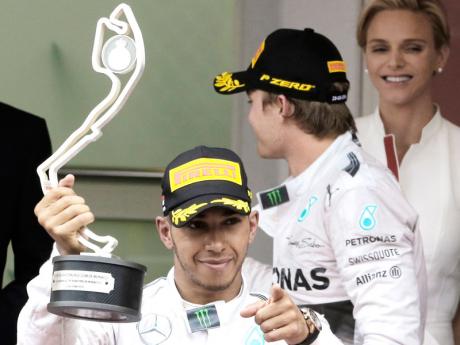 Mercedes driver Lewis Hamilton of Britain (left) with the trophy for second place in yesterday's Monaco Grand Prix. In the background are winner Nico Rosberg (centre) of Germany and Princesse Charlene. - AP

Lewis Hamilton finished second to Mercedes teammate Nico Rosberg in a tension-filled Monaco Grand Prix here Sunday, a result that halted his run of four straight victories in the new Formula One season.

Starting from second on the grid following a controversial end to final qualifying on Saturday, Hamilton was unable to get past his German counterpart on the narrow street circuit, and was nearly nine seconds behind at the chequered flag.

Rosberg clocked one hour, 49:27.661 minutes for his second straight win in the posh city on the French Riviera.

"I had great pace, you know, obviously I felt I was very strong today, but it's a very, very difficult circuit to overtake on," said a subdued Hamilton.

Controversy erupted during Saturday's final qualifying when Rosberg spun out on the final lap, blocking the track and forcing the abandonment of qualifying. It meant that Hamilton, who was up on speed and had a good chance of overtaking Rosberg's time to clinch pole, was forced to settle for second on the grid.

Mercedes team boss, F1 legend Nikki Lauda, confirmed that Hamilton had accused Rosberg of deliberately crashing to deny him a chance at pole.

Hamilton, who has not won in Monaco since his cham-pionship-winning year in 2008, said he believed the intense competition with Rosberg would continue until late in the season.

"Generally, there is a fierce battle between me and Nico and it will continue that way to, I'm sure, quite late in the season," said the Brit, who was in Barbados last weekend for the Top Gear Festival.