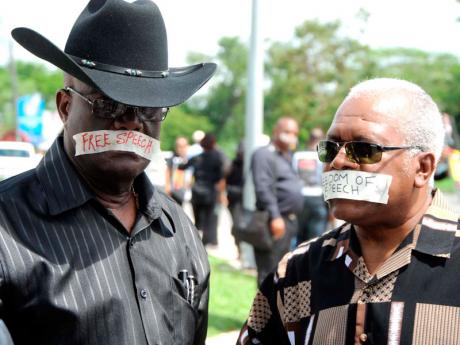 Bishop Herro Blair (left) and the Reverend Al Miller protest the dismissal of Professor Brendan Bain at the gate of the University of the West Indies in St Andrew yesterday. - Jermaine Barnaby/Photographer

There are indications that booted head of the Caribbean HIV/AIDS Regional Training Network, Professor Brendon Bain, is not taking his dismissal lying down.

By all indications, nor are prominent church leaders, retired politicians, students of the University of the West Indies (UWI) and other Jamaicans who continued their protest outside the gates of the institution yesterday.

A swollen crowd of demonstrators yesterday vowed to fight to the death to keep freedom of speech alive, despite the threats they say have been revealed by Bain's dismissal.

The UWI removed Bain from CHART last week, arguing he had lost the confidence of a significant group of the programme's constituents after he provided a report for inclusion in a Belize court case. The report was used by church groups as they argued against repealing a law that criminalises homosexual activity.

Gleaner sources have indicated that the university could be dragged before the courts for wrongful action in bowing to pressure from the gay community.

But placard-bearing protesters signalled that they would not be awaiting a court decision as they continued to take UWI administration to task.

Clad in black, the protesters yesterday increased the tempo of their stance against Bain's dismissal.

As occurred last week, they were supported by numerous motorists who honked their horns in solidarity with the protesters as they passed the demonstration.

"As long as I am alive I will seek to address this issue. If me dead, ah so, but I will fight until then," declared 88-year-old O.D. Ramtallie, a former parliamentarian who has suffered three strokes in recent years.

Head of the New Testament Church of God, Bishop Wellesley Blair, declared he would rather "die than switch", echoing a message he has preached for decades.

Other notable ministers of religion on hand were Blair's brother Herro, the former political ombudsman; Al Miller; and Sam Green.

Michael Young, a businessman who claimed to have lived through the "San Francisco experience" - the United States city is known for its large and thriving gay community - warned that the system was chipping away at what was regarded as the social and moral fabric "as we know it".

Public commentator Richard 'Dickie' Crawford was also out, with return protesters Shirley Richards and Betty Ann Blaine, who continued to lash out against UWI's action.

Crawford warned that the homosexual community was likely to soon be calling for the resignations of Prime Minister Portia Simpson Miller and other government ministers.

"They have started to lash out because the prime minister has not had the buggery law repealed and they have attacked the opposition leader because he suggested a referendum," he said.

Piercing heat descending mercilessly on the area, but failed to deter the growing number of protesters who marched slowly.

Her eyes fixed, a young woman in an advanced state of pregnancy kept pace.

Another young woman and her four-year-old also kept up with the crowd.

Students of the university said they were in mourning over the death of free speech in Jamaica.