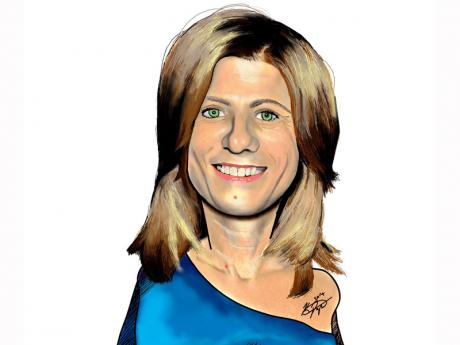 Eight years ago, if Michele English had gone by news reports, she would have stayed away from Jamaica. This means she would not have become the head of Flow and Columbus Business Solutions, and she certainly would not have had lunch in New Kingston with me, last week. I dare say it worked out well for all concerned, then, that when offered a job at Flow, the woman who grew up in the bucolic Canadian island of Newfoundland, went with her gut and moved here in 2006 with her husband and daughter.

"Of course you hear things. But that's how it is with a lot of places. You have to check things out for yourself when it comes to making important decisions like that," she said. It was a Wednesday afternoon and English, who arrived precisely on time for our lunch, had been having a tough morning. The preceding hours were monopolised by family and work obligations that, even for her, can be hard to handle. She was recently promoted and will be moving to south Florida, in a few weeks, to take up new duties for the company. But, there's still a lot to be done at her current post, and when coupled with all the things that need to be in place for the move, these last days she has in Jamaica end up being packed from dawn till dusk. She smiled as she thought back to her first experiences in Jamaica.

"When we were still thinking of moving here, my husband and I travelled to Montego Bay. We went to the Jazz and Blues Festival to be out and feel what it was like. I was struck by how smoothly such a big production like that went. Everything was just so great, and the crowd was so calm and warm. It was pleasant and nothing like you see on the news overseas. It really is sad that the image people get of Jamaica can be so negative," she said. After that positive introduction to the island, English and her husband made the journey to Kingston. They found things there as welcoming as they were in Montego Bay and this solidified their decision to move to Jamaica.

"Life in Jamaica turned out to be a lot like life in Newfoundland. I think it's the island culture. There's a certain connection the people have with each other; a certain warmth about them that I think you find more in an island culture than anywhere else. I'm very happy we moved here. In these eight years we've met some truly special friends. The relationships we've built during this time, both at work and in our personal lives, mean a lot to us and I suspect this is what I will miss the most when we leave. Florida will be great, I'm sure, but it won't be the same," she said.

"I feel bad too, about moving my daughter again. She's adjusted well to Jamaica and has some great friends here. She's settled and a part of me is sad to force her to start over again somewhere else. She loves it here and she's already asking me when we'll be back to visit, so that she can plan with her friends," said English. Her tone softens when she speaks of her 13-year-old daughter. "She's a great girl. I know she will adjust to life in Florida quickly and maintain the bonds she's made here in Jamaica."

English and her family, in a relatively short time have built a happy and comfortable life in Jamaica, and for many, her decision to leave it all behind and start afresh in another country, might be hard to understand. But when you spend time with English, you quickly understand her motivation. She is excited about her job and the opportunity to break new ground and achieve new goals. She's driven. And she enjoys conquering obstacles.

"The role I'm moving into is completely new, so I have sort of a free hand to make it into something great. It's an opportunity to create something from scratch and I'm eager to take it on. It's easy to get comfortable but when new challenges come along that ignite that fire inside you, I think it's best to take them on. I wasn't in any way unhappy or bored with my job in Jamaica, but when I heard about this new opportunity, I felt that thrill inside and I knew I wanted to go for it," she said.

Her new job title will be 'executive vice-president and chief customer officer', and she'll have oversight for eight markets in the region. She's not preoccupied with titles though, and admits that one aspect of her new job that she's looking forward to, is the relative anonymity she'll be able to enjoy again.

"When I got to Jamaica, I fought hard with my team about that. They told me that I needed to get out more, to be out and be seen as the head of the company. That really wasn't something I was used to, so I pushed back on it for a while. I will say, though, that I eventually took their advice and I've certainly seen the benefits," she said.

English said that while she would have preferred to spend more nights at home with her family and perhaps a good book, she was able to build important relationships by going out more. "The people you meet and the opportunities that come out of those meetings are priceless. I still tried hard to get my nights at home, but I definitely saw the advantages of going out more," she said.

"I learned that you have to be more open and aware of how things are done in different places. You have to respect different cultures. I think that when I first got here, I was doing things and expected things to be done based on how they are done in Canada. That was wrong and it's a lesson I will take with me."

English is big on learning from mistakes. She told me that, years ago, while working in the human resources department of a company in Canada, she accidentally sent out some employees' private salary information to the wrong persons. "I immediately picked up the phone and called everyone who was affected, and apologised. It was a real apology. I felt horrible about it. The odd thing is that when I called I was expecting to be met with anger. Everyone was really understanding though. I learned from that experience that when you make a mistake, instead of trying to excuse it away or cover it up, the best thing to do is own it. You have to stand up and say I did this. People respond much better to you when they know you are being genuine."

So with these and other lessons learnt over an already exceptional career, and with the support of her Jamaican friends and colleagues, English is prepared for her next challenge. She'll be miles away physically, but her heart will remain in Jamaica.

"I'm forever changed by Jamaica. I love it here and won't be able to stay away for long. Jamaica is special. We'll be back soon and often," she laughed.