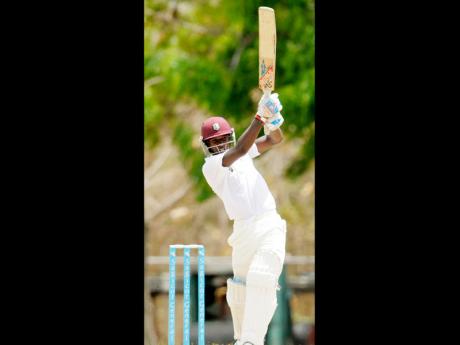 Jermaine Blackwood drives down the ground during his innings of 140. - WICB Media photo

Jermaine Blackwood further enhanced his growing credentials with a glamorous hundred for the West Indies High Performance Centre (WI HPC) against Bangladesh A on the opening day of the first four-day 'Test' yesterday.

The right-hander slammed 140 - his second first-class century - to lift WI HPC to 292 all out after they were sent in by Bangladesh A at the Windward Cricket Club.

Leon Johnson chipped in with 56, and Assad Fudadin got 22. But the innings plunged into decline from a strong position of 197 for two, as HPC lost their last eight wickets for 95 runs.

At the close, the visitors were five without loss in the only over possible before umpires called time.

The day, however, belonged to Blackwood, whose innings underlined the HPC's effort. He struck 23 fours and one six, facing 160 balls in nearly 3-1/2 hours at the crease.