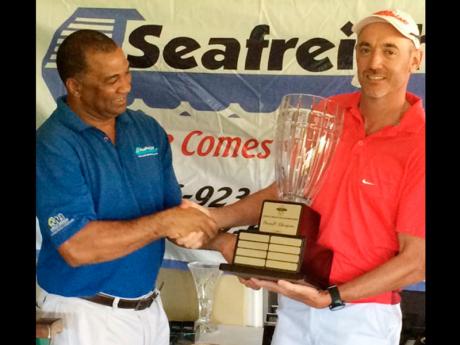 With rounds of 71, 77 and 71, Dr Mark Newnham secured a major win and emerged the overall champion of the 2014 Seafreight National Amateur Golf Championships.

Edwin Lowe captured the men's 7-11 group with a total of 241. Philip Prendergast took second place with 242.

André Foote, meanwhile, captured the 12-17 section with 271, while Clifton Johnson was a close second with 273.

Keith Stein, in his first event as a senior, took the overall senior champion crown with rounds of 76, 78 and 73 to end with 227.

Easton Williams emerged the overall super senior champion on 232. Bruce Lyn was second with 243, and Lincoln Williams finished third with the same score. However, Lyn had the best final-day score (77).

Tiana Cruz was first with 234, and Rochelle Prince finished second with 249.

A strong contingent of junior golfers came out in support of the tournament. Sandals-based Romaine Evans (240) and Austin Swaby (277) finished first and second, respectively, in the boys 16-17 category.