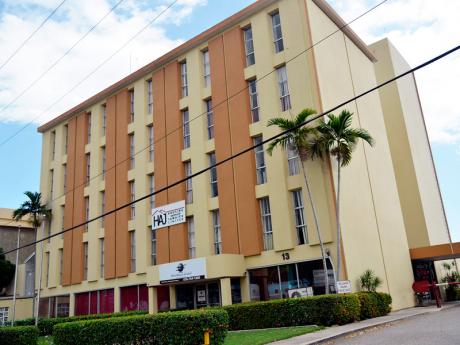 The Housing Agency of Jamaica is still dealing with outstanding issues 16 years after the merger that created it.Norman Grindley/Chief Photographer

Wigton Wind Farm was incorporated in April 2000 as supposedly a wholly owned subsidiary of Petroleum Corporation of Jamaica. It became operational in May 2003.

It is mandated to provide increased wind power and other renewable energy to generate electricity at its base at Spur Tree.

All has not gone well at Wigton. It made a loss of $256 million in 2012-13 and then surprisingly made a profit of $188 million in 2013-14 due to a 27 per cent increase in sales and $100 million reduction in its finance expenses. It is unclear from documentation reviewed as to what caused the growth in the sales or the drop in finance costs.

Wigton, a government-owned company, was recently granted a licence by the Government to expand its production of renewable wind energy. What was not clear at the time was that it was going to receive funding of an unspecified amount from the PetroCaribe Development Fund. Additionally, it is going to receive this year a capital injection from its parent company of over $500 million.

The terms of the loan from PetroCaribe is, at this time, not known by this column. Presumably, the capital injection from its parent company will not bear any interest.

The ethical issue is whether the left hand of Government should be subsidising the right hand.

There were other proposals for renewable-energy licences which were not granted. Should Wigton enjoy the benefits of lower-than-market-cost loans and capital injections from other government entities? Other competitors for renewable-energy projects would have had higher costs due to not having access to low-cost capital.

It would be useful if the portfolio minister for energy, Phillip Paulwell, and the chairman of Wigton Farms, Ian Kelly, could explain why a government agency competed with private investors for a renewable-energy licence and, further, why Wigton has been given preferential access to probably low-cost funds, which were not offered to private-sector investors?

When they answer, perhaps they could explain why Companies house shows the shareholders of Wigton to be Rodney Salmon (2 shares) and Raymond Wright, of blessed memory (1 share). How can two private shareholders apparently own a government company receiving not only a PetroCaribe loan, but also a capital injection of $500 million from the Petroleum Corporation of Jamaica?

Why is this business not divested if indeed it is owned by the government?

Why not sell JPS stake?

Jamaica Public Service Company Limited (JPS) is an example of how not to treat foreign investors.

The power utility is 20 per cent owned by the Government of Jamaica, which nominates three directors to serve on its board - positions currently held by Professor Gordon Shirley, Professor Evan Duggan and Fitzroy Vidal. It appears that the licence authorising JPS to supply electricity, subject to Office of Utility Regulations (OUR) regulation, was extended in 2007 for the period to 2027.

JPS had a very poor operating performance in the year to December 2013 during which period it made after-tax profits of US$7 million, down from US$12 million in 2012.

This represents a less than one per cent return on the shareholders equity in the company. No dividends were paid to ordinary shareholders.

JPS is currently not only a bad investment for the two major shareholders - Marubeni Corporation of Japan and Korea Electric Power Corporation, of South Korea - but also for the Government of Jamaica.

JPS operating revenue fell by almost four per cent in 2013 and its finance costs rose rapidly, by 17 per cent. It has an expensive defined-benefit pension plan on which it had to record a loss of US$3.3 million in 2013.

The utility has US$64 million of receivables that are over 90 days. Its accounts appear to have a provision of US$38 million against that receivable. One can assume that this receivable - almost J$7 billion - is due from GOJ and is not included in the country's national debt.

The company has borrowings from 12 different financial institutions totalling US$363 million - the major lenders being represented by Deutsche Bank. At the end of 2012, JPS was not compliant with commitments to some of its lenders. This breach was corrected in 2013. Foreign-exchange losses in 2013 amounted to US$21 million, up 40 per cent over the previous year.

JPS indicates that it has unused tax losses amounting to US$96 million.

In 2012, it overstated by US$83 million its estimate of unbilled electricity, and "has significant concentration of credit risk in respect of amounts receivable from the GOJ and its affiliates" aggregating US$42 million at the end of 2013.

A surprising aspect of JPS' ownership is the continuing shareholding of the Jamaica Mutual Life Assurance Company, an entity that no longer exists.

JPS has serious issues to deal with. Its operating revenue from both residential and commercial/industrial sources is falling and its system losses as a percentage of generation are increasing - now 26 per cent. Systems losses presumably include theft in addition to transmission loss.

Should the Government of Jamaica continue to own a portion of JPS? It currently is not a good national investment. Part of that poor assessment is because the GOJ is taking advantage of the company by running up massive amounts of unpaid interest-free bills, and allowing massive theft of electricity to continue unabated.

What is happening to JPS is a terrible example of how a foreign investor should be treated. JPS may not be loved but Jamaica will not get serious and honest foreign investors if the GOJ treats them like they treat JPS.

Minister Paulwell needs to either depart his post or settle down and get the energy sector run more effectively. Maybe he should start by getting the Government to sell its interest in JPS.

I am grateful to Loretta Reid-Pitt, senior manager at HAJ, for sending the organisation's audited accounts and annual reports following our brief comment on the company in my May 14 article.

So few public officials seem prepared to give out accounts even though, under the law, such documents are in the public domain.

The HAJ accounts describe in admirable detail the functioning of the agency - for example, it discloses not only the operations of the company but also information about management remuneration - the managing director earns $14.8 million as a package - and other details not always included in public-sector accounts. Well done, HAJ.

The organisation, under the safe chairmanship of Derick Latibaudiere, appears to have been given a basket to carry water by the Cabinet decision of April 1998 that merged Operation Pride, the Caribbean Housing Finance Corporation Limited and the National Housing Corporation Limited into the HAJ.

Imagine that 16 years after that cabinet decision, some of the loans and some of the properties to be merged from, presumably, Operation Pride are still not transferred.

It would be interesting to hear from management and the board why this incredible delay has occurred.

This column reviews the audited and in-house accounts and reports of companies and entities owned or influenced by Government. Readers are invited to add comments at Gleaner Online.