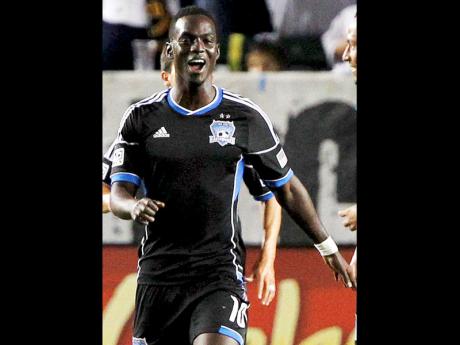 They had a single-minded desire, and, although they took different paths, the British-born duo of Simon Dawkins and Joel Grant has finally landed where they have always longed to be: playing for Jamaica's senior national football team.

Dawkins had never pulled on a national shirt before Monday's friendly international against Serbia. Grant, who also made his senior debut in the game, had briefly sampled the Reggae Boyz experience at youth levels. Yet both had to wait a long time for their chance. At times, they felt like lost Boyz after being repeatedly overlooked. It wasn't because they lacked playing credentials either.

Dawkins and Grant are quick, skilful attackers. Dawkins represented England at youth level and is a former prospect of English Premier League (EPL) club Tottenham Hotspur. He played Major League Soccer then returned to the EPL with Aston Villa before landing at Derby County of the English Championship. Dawkins was contacted by Jamaica years ago but didn't get a formal invitation. Interest faded. Four months ago, he acquired the necessary documents to make him eligible for international competition.

Grant, who plays for Yeovil Town, had his documents years ago after representing Jamaica's Under-20 and Under-23 teams.

"Obviously, it took a while to get everything sorted," Dawkins said. "Now it's sorted and I'm happy with that."

For both 26-year-olds, the wait was long, but Monday, Dawkins and Grant capitalised on their chance by putting on displays of skill and confidence against high-quality opposition.

In the case of Grant, who was simply ignored after being tagged a future senior prospect, Monday's performance was pure joy.

"When I represented the Under-20s and the Under-23s, it was always my ambition to represent the country and to finally complete my first senior game," Grant said. "I'm over the moon, really."

However, Dawkins and Grant aren't yet over the disappointment of Jamaica's failed 2014 World Cup campaign. They desperately wanted to play but could only watch and root for Jamaica.

Still, the thought of actually playing for Jamaica didn't actually sink in by arriving. For Dawkins, the moment came mid-way the first half Monday.

"I looked up (at the stadium monitor) and I see 'Serbia v Jamaica' and I said 'Wow! I'm playing in this right now!' and obviously, it's a dream come true, really," he recalled.

Even if, for him, it followed a nightmare. Dawkins and Derby County were beaten 1-0 in last weekend's play-off final for EPL promotion by Queens Park Rangers. Armed with "two hours sleep," he made it to Jamaica's training session Sunday. Possibly, Dawkins admitted, he was too tired to be nervous against Serbia.

With Yeovil's season over weeks ago, Grant's physical condition wasn't the best when he arrived here. But, like Dawkins, he wasn't about to spurn a chance to impress.

"Definitely," he said. "… My fitness isn't quite up to what it should be … but I really enjoyed myself."

Dawkins and Grant are guaranteed future chances to prove themselves. They're in Jamaica's squad for upcoming friendlies against Switzerland, Egypt and France. Both plan to be around long after that, eyeing the next World Cup. It's what they've longed for.

"It wasn't to be this time (2014)," said Grant, "but hopefully, we can push on and improve from here and qualify for the next tournament."

Dawkins has no doubt. His appetite for representing Jamaica is far from satisfied.