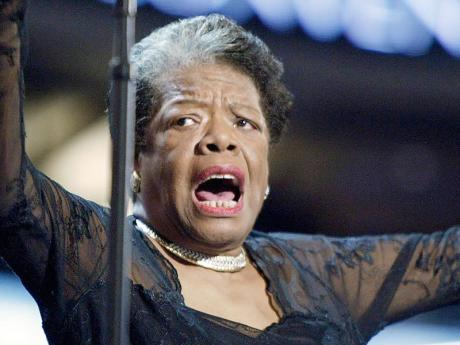 In this July 27, 2004 file photo, poet and activist Maya Angelou speaks onstage during the Democratic National Convention, in Boston. - File

"No sun outlasts its sunset, but will rise again, and bring the dawn." Those were the words of Maya Angelou as she responded to the news that her dear friend and South African president, Nelson Mandela, passed last year. The potent words have now resurfaced as news of Angelou's passing spread throughout the world.

Her global influence is undeniable and since yesterday's announcement, there has been an outpouring of tributes for a poet who wrote her way into the hearts of many.

Yesterday, key players from the local poetry industry reacted to the news of Angelou's death.

President of the Poetry Society of Jamaica, Tommy Ricketts, likened Angelou to Jamaica's Louise Bennett saying the two were "cut from the same fabric" having the ability to influence and change things irrespective of the circumstances. "Maya is so much to anyone who writes; she's like the poet laureate of the African Diaspora. She made people realise that they could be anything they wanted to be and despite how much she went through, she overcame the obstacles with a smile just like Miss Lou," he said. He went on to encourage persons to read Angelou's work especially her autobiography, I Know Why the Caged Bird Sings, because it has a timeless message that inspires.

"It is one of the most defining pieces of literature and everyone should read it."

Kwame Dawes, director and co-founder of the Calabash International Literary Festival scheduled for this weekend, said Angelou was one of the poets the festival sought but never got the chance to book because of time. Making reference to her United States presidential inauguration poem, Dawes said Angelou had the "ability to write a poem of technical skill and public appeal - a combination that eludes so many poets."

He describes her death as a major loss for the global writing community.

"Maya Angelou taught those of us who have embraced writing as a career the sense of possibility by the way she walked in the world proudly as a writer and as a poet. She will be missed, and the Calabash International Literary Festival Trust celebrates her life and legacy as a great literary voice of our time," said Dawes.

Professor Mervyn Morris also commented on Angelou's passing stating that in addition to her undeniable skill with the pen, she was a great performer.

"She was the kind of poet that her whole audience could understand. She had a wonderful, mesmerising voice and with minimal use of her body, had great stage presence."

Mentioning that Angelou was a personal friend of Miss Lou, Morris said the two, although similar, had different ways of delivery.

"Maya's normal mode of delivery was drama, Miss Lou was more focused on comedy and making people laugh, but they both aimed to inspire."

Poet Kei Miller said her loss will be felt around the world as she knew how to connect with her audience.

"Her poetry was not interested in showing off her huge talents as a poet, but in communicating to her audiences - both white and black. Fans of Angelou will remember her, not only as a writer, but an inspiring public speaker with a deep and compassionate wisdom."