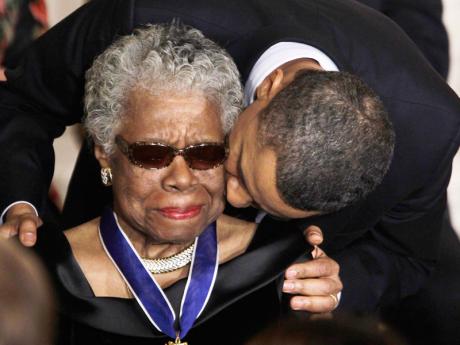 In this February 15, 2011 file photo, President Barack Obama kisses author and poet Maya Angelou after awarding her the 2010 Medal of Freedom during a ceremony in the East Room of the White House in Washington. - File photos 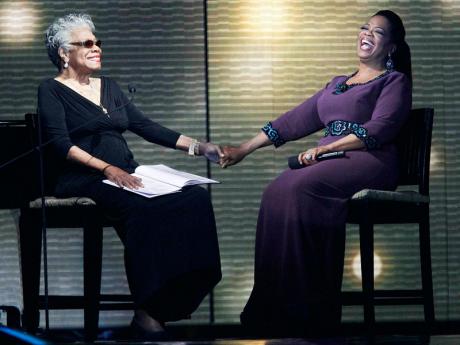 In this May 17, 2011 file photo, Maya Angelou (left) and Oprah Winfrey laugh during a star-studded double-taping of 'Surprise Oprah! A Farewell Spectacular', in Chicago.
1
2
3

Politicians, media figures and fellow artists are paying tribute to Maya Angelou, the author of I Know Why the Caged Bird Sings, who died yesterday at age 86. Here is a look at what people, from President Barack Obama to Oprah Winfrey, are saying:

"Over the course of her remarkable life, Maya was many things - an author, poet, civil rights activist, playwright, actress, director, composer, singer and dancer. But above all, she was a storyteller - and her greatest stories were true. A childhood of suffering and abuse actually drove her to stop speaking — but the voice she found helped generations of Americans find their rainbow amidst the clouds, and inspired the rest of us to be our best selves."

"With Maya Angelou's passing, America has lost a national treasure; and Hillary and I, a beloved friend. The poems and stories she wrote and read to us in her commanding voice were gifts of wisdom and wit, courage and grace. I will always be grateful for her electrifying reading of 'On the Pulse of Morning' at my first inaugural, and even more for all the years of friendship that followed. Now she sings the songs the Creator gave to her when the river 'and the tree and the stone were one.'."

"She won three Grammys, spoke six languages and was the second poet in history to recite a poem at a presidential inauguration. But what stands out to me most about Maya Angelou is not what she has done or written or spoken, it's how she lived her life. She moved through the world with unshakable calm, confidence and a fierce grace. I loved her and I know she loved me. I will profoundly miss her. She will always be the rainbow in my clouds."

"For those who never saw her, they can now listen to her and learn. She has much to teach this generation and generations unborn about what it means to be an authentic person and the power of the genuine. When she spoke, people listened. When she wrote, people read, and that happened because she lived and she was the word that became flesh and dwelled among us."

"From collaborating on two songs on my soundtrack for For Love of Ivy in 1968 to delivering her poem 'Pulse of the Morning' during the Clinton Inaugural in 1992, working with Maya always brought joy and love. As an author and poet, Maya Angelou's ability to channel God's voice and express the feelings deep within all of humanity will never be matched by another. She gave us words when we could find none, and helped us to see clearly when the light was dimmest. Maya would always teasingly say to me, 'Darling, let's have lunch,' and I will always be ready. I will miss her deeply, but I know her presence will always be with us."

"So sorry to hear about the passing of such a great woman. In addition to I Know Why The Caged Bird Sings, I loved her recipes and manner! Wisdom at work! Enlightening for a nation!"

"Maya, a dear friend, helped change our hearts and minds about the African-American experience in the United States, bringing it to vivid life, and her spirit and energy crossed all borders and deeply affected readers around the world."

Maya Angelou's memoir, I Know Why The Caged Bird Sings was occasionally attacked, for seemingly opposite reasons.

Meanwhile, Angelou's passages about her rape and teen pregnancy have made it a perennial on the American Library Association's list of works that draw complaints from parents and educators.

"'I thought that it was a mild book. There's no profanity," Angelou told the AP. "It speaks about surviving, and it really doesn't make ogres of many people. I was shocked to find there were people who really wanted it banned, and I still believe people who are against the book have never read the book."

Angelou appeared on several TV programmes, notably the groundbreaking 1977 mini-series Roots. She was nominated for a Tony Award in 1973 for her appearance in the play Look Away. She directed the film Down in the Delta, about a drug-wrecked woman who returns to the home of her ancestors in the Mississippi Delta. She won three Grammys for her spoken-word albums and in 2013 received an honorary National Book Award for her contributions to the literary community.