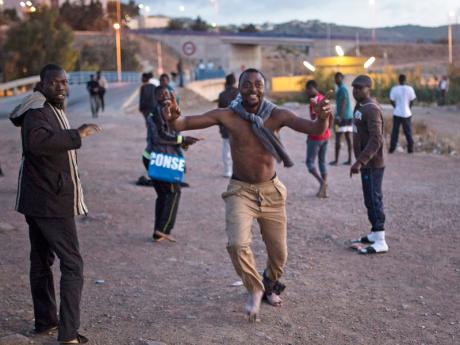 A sub-Saharan migrant is detained and sent back to the Moroccan side by Spanish Guardia Civil officers after scaling a metallic fence that divides Morocco and the Spanish enclave of Melilla, early yesterday.

A thousand African migrants charged a barbed-wire border fence in Spain's North African enclave of Melilla, yesterday, with many managing to get across, officials said, but dozens of others were beaten back by Moroccan and Spanish police.

During the pre-dawn border storming, cries of pain and noises of people being hit could be heard as police from both sides tried to prevent dozens of the sub-Saharan migrants from entering the city from Morocco.

A spokesman for the Interior Ministry said it had no indication that excessive force was used.

Spain's North African city enclaves of Melilla and Ceuta are regularly targeted by large groups of African immigrants living illegally in Morocco who try desperately to cross into Europe in the hope of finding a better life.

Those who made it Friday dashed through the streets to an official holding centre were they were greeted by cheering migrants detained since previous crossings.

About 500 people in all managed to enter, bringing the total to some 2,400, the spokesman said. The holding centre only caters for some 450 people, and military tents have been erected to cater for the influx in recent months.