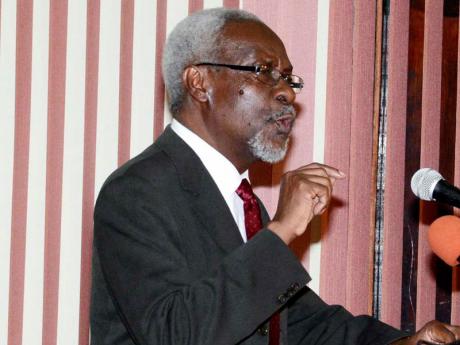 Former Prime Minister PJ Patterson is urging that the debate over Jamaica's buggery law be framed within the context of current world trends and the realities that various differences exist in the society.

Patterson, addressing a Rotary Club of Spanish Town meeting at the Police Officers' Club in St Andrew Tuesday night, said both sides of the debate - those for, and those against repealing the buggery law - should find some common ground on which to resolve their differences in opinion.

He said the society has to engage in a more meaningful conversation on the issue, which must take place in an environment that recognises and accepts that there will be differences in people's sexual preferences.

"It's an issue, I know, where people have very strong positions, but we have to find a way of moving away from polarised positions into one that accepts that differences of race or colour, differences of class, [and] differences even in terms of sexual preferences may have to be addressed in conformity with the prevailing global environment in which we live," Patterson said.

Patterson, who served as prime minister from 1992 to 2006, said there is a certain level of privacy that should not be invaded and there is already an accepted code as to what are considered appropriate "public displays of relationships from that which happens in the privacy and confines of one's house".

However, he was quick to point out that those advocating for changes to the law must also demonstrate tolerance towards those who do not share their views.

"Those who wish to have changes must accept the right of persons to speak freely, reflecting their convictions and they can't expect to have all the say going one way, they must expect others to have contending positions," he added.

The latest round of public debate over the laws outlawing buggery has stemmed from the University of the West Indies' dismissal of Professor Brendan Bain from his position as director of the Caribbean HIV/AIDS Regional Training (CHART) Network.

The termination of Bain's tenure came after several groups connected to CHART said his expert testimony, provided in a constitutional challenge to Belizean sodomy law, represented a conflict of interest and they no longer had confidence in his leadership.

For the former prime minister, the matter is now at a stage where he said he expects a court battle to commence shortly.

"I suspect it is a matter that will find itself before our courts," Patterson said.

He said the current impasse raises some very serious issues, the crux of which speaks to professionals and their duty to provide fulsome and trustworthy reports in court.

"At the bottom of this is the question of the duty of a professional person in giving expert evidence to base that testimony on reliable analysis and a full flow of information."

Patterson said this was a matter that the entire nation should become involved with, as it has far-reaching implications.