Barbican too hot for Reno 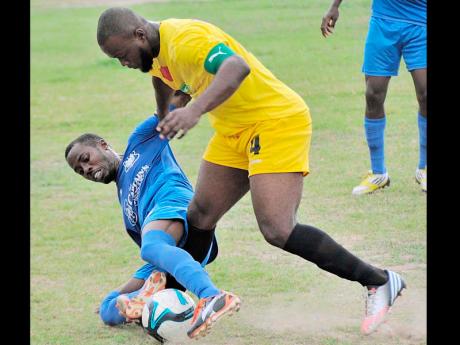 Shaquille Lewis (66th) and Jermaine Parris (84th) were the goalscorers for the Denton Shedden-coached Barbican. Former national Under-20 striker Craig Foster scored the lone goal for Reno in the 10th minute.

In the day's other game, Jamalco and Axum played to an exciting 2-2 draw at the St Mary's Sports Club. Michael Hinds (30th) and Oshane Duhaney (90th) were the scorers for Jamalco. Derrick Planter (39th) and Peter Brown (56th) netted for Axum.

Jamalco lead the standings with four points after two rounds of matches. They are followed by Reno and Barbican, who are both locked on three points respectively, ahead of Axum who are on one point.

At the Barbican field, Reno dominated the early exchanges and were rewarded when Foster arrived in the six-yard box to calmly slot the ball home after a well-placed left-sided cross from Melvin Blair, getting the better of custodian Nicholas Campbell, who was advancing out of his goal.

The speedy and skilful Foster came close to doubling Reno's lead a few minutes later but his powerful effort from 12 yards was tipped over the crossbar. Barbican's best scoring opportunity fell at the feet of striker Shennar Parkinson, but he failed to hit the target from close range.

Barbican dominated the early possession in the second period and were finally rewarded when Lewis netted the equaliser. The lanky Lewis latched on to a loose ball inside the Reno 18-yard box to fire home past goalkeeper Dennis Taylor.

Barbican had their opponents on the back foot for the remainder of the second period and they came close to doubling their advantage on a number of occasions, but faulty shooting from their strikers let them down. They were finally rewarded six minutes from full time when Parris' long-range effort was deflected into the back of the net past Taylor.

Shedden was very delighted with his team's performance. "I think this is a good victory for us because we needed it to stay in touch with the leaders," said Shedden.

"We really played well, especially in the second half, because we dominated the game, but we should have scored some more goals," he said.

"We gave up the first goal, which was a very soft goal considering how well we were playing," said Downswell. "Overall, this is a lesson for us in terms of our performance because we have to be more clinical in front of goal, especially in and around the 18-yard box."