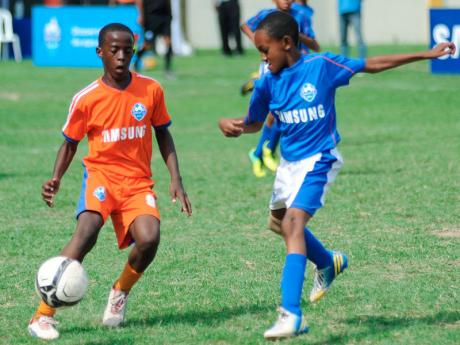 Quest Preparatory's Rivaldo Mitchell prepares to beat a Mona Prep player during the Samsung Cup Youth Tournament final at UTech on Saturday. Mitchell is the competition's leading all-time goalscorer with 16 strikes in nine matches, including one in the final that they won 3-0 on Saturday. - Jermaine Barnaby/Photographer 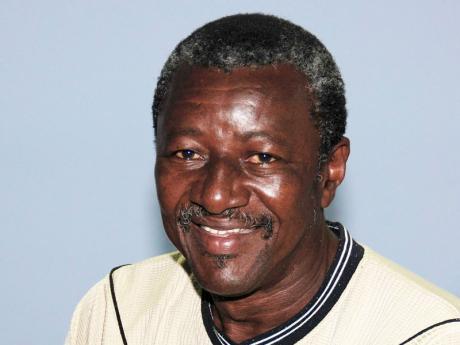 Bucknor says his players respond better knowing parents are actively involved, whether standing on the sidelines or shouting from the stands, and also being at training sessions.

"It is simply remarkable as I realise that these players love when parents or guardians are at their games," he said. "That is when they play hard and it's a great advantage for any team when it is so. At Corinaldi we have some parents who are constantly at the matches, and the players tend to respond to this."

Bucknor says lending time and effort to train young players at the grassroots level is where he is most comfortable. The results in this year's championship confirms this, as he has marshalled his players through a tough Zone D that also featured Howard Cooke Primary, Servite Primary School, Hemmingay Prep, Esher Primary and Columbus Prep.

Corinaldi are now awaiting a serious test of their title credentials from Tomlinson Prep, which has been the surprise team of the tournament this year.

Interestingly, Tomlinson Prep were the 'beating sticks' last year, but they are now laying a claim for the most improved school.

"It is shaping up to be a really hard game for us because Tomlinson Prep are no pushovers. They have improved greatly from last year, but I think we still have enough to win and advance because of the experience and quality of my players," reasoned Bucknor.

"And this is even more important because of the level of interest shown by parents, who also see this Samsung Cup as an important element in the development of their children."

Bucknor added that boys and girls across the country, participating in the Samsung Cup, have been given a massive boost by the fact that parents too are taking an interest.