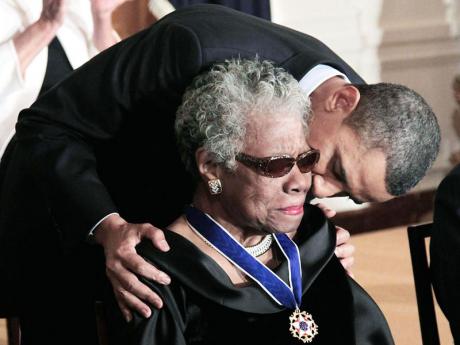 The death of poetry legend Maya Angelou has triggered an outpouring of tributes to honour the "phenomenal woman".

President Barack Obama, who in 2011 awarded the American best-selling author, poet and activist the Presidential Medal of Freedom - the highest US honour for a civilian - described Angelou as "one of the brightest lights of our time".

He hailed Angelou, who died at 86, as "a brilliant writer, a fierce friend and a truly phenomenal woman".

Angelou made her name with the memoir, I Know Why the Caged Bird Sings, which charted a childhood of oppression and abuse in the Deep South in the 1930s.

Her death comes just days after she cancelled an appearance in which she was to be honoured at the Major League Baseball (MLB) Beacon Awards luncheon in Houston.

Her son, Guy B. Johnson, said in a statement on his mother's Facebook page that she passed peacefully at her home in Winston-Salem, North Carolina, on Wednesday. He added: "She lived a life as a teacher, activist, artist and human being. She was a warrior for equality, tolerance and peace."

Raised by her grandmother in Stamps, Arkansas, Angelou was raped by her mother's boyfriend at the age of seven years old. After she told her family what had happened, the boyfriend was killed.

"I thought my voice had killed him, so it was better not to speak - so I simply stopped speaking," she said. Angelou remained mute for five years, but read voraciously.

She became a single mother at 17 years old and danced in a strip club before the first of three marriages.

As she rose to fame, she befriended figures like Malcolm X, Nelson Mandela and the Rev Martin Luther King, Jr. She launched an acting career and earned an Emmy nomination.

She was also mentor to talk-show queen Oprah Winfrey.

Winfrey yesterday released a statement describing her as a "mentor, mother/sister and friend since my 20s".

She said: "She was there for me always, guiding me through some of the most important years of my life. The world knows her as a poet, but at the heart of her, she was a teacher. 'When you learn, teach. 'When you get, give' is one of my best lessons from her."

She added: "She won three Grammys, spoke six languages and was the second poet in history to recite a poem at a presidential inauguration. But what stands out to me most about Maya Angelou is not what she has done or written or spoken; it's how she lived her life.

"She moved through the world with unshakeable calm, confidence and a fierce grace. I loved her and I know she loved me. I will profoundly miss her. She will always be the rainbow in my clouds."

On Facebook, Bishop T.D. Jakes also paid homage to the poet laureate. He said: "In honor of the legendary poet, Maya Angelou 'Still I Rise'. A literary voice revered globally for her poetic command and her commitment to civil rights, a novelist, actress, educator & activist. A national treasure has passed beyond the veil, faded from view."