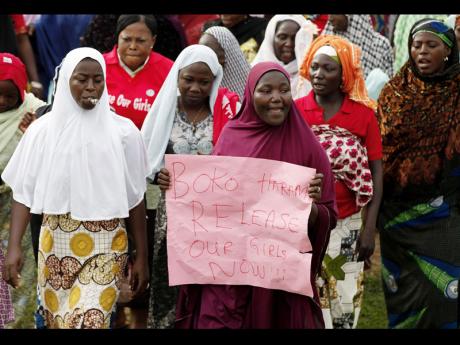 Women sing slogans during a demonstration calling on the government to rescue the kidnapped girls of the government secondary school in Chibok, in Abuja, Nigeria, on Wednesday. AP

Nigeria's leader vowed yesterday to "do everything possible to bring our daughters home," referring to the mass abduction of more than 300 schoolgirls, and said that the Islamic extremists who kidnapped them threaten the country's democratic gains.

"It is a sad fact that, as I address you today, all the gains of the past 15 years of democratic governance in our country are threatened by the presence of international terrorism on our shores," President Goodluck Jonathan said in a speech marking Nigeria's transformation from decades of military dictatorship. He also blamed the Islamic uprising on "extremist foreign elements" and offered amnesty to those who renounce violence.

Jonathan gave no details of what is being done to rescue the girls who the military claimed this week it has located. But the military chief said he fears using force to rescue them, which could instead get them killed. Jonathan has ruled out swapping the girls, who were kidnapped from a school in the town of Chibok on April 15, for detained insurgents.

Boko Haram started off as a moderate religious sect nicknamed after the shouted refrain of its leader, "Western education is sinful", who preached that Western influences have corrupted Nigerian society and caused the massive graft that impoverishes the nation and keeps people in the northeast among the poorest of the poor.

Jonathan has promised to address the poverty that helps fuel the uprising, but only once the insurgency was put down. The World Bank says two-thirds of 170 million Nigerians struggle in poverty in Africa's biggest oil producer.

Government troops sought to crush the Boko Haram movement in 2009, blasting its compound and mosque in Maiduguri, capital of northeast Borno state. Some 700 people were killed. The captured leader, Mohammed Yusuf, was shot dead in police custody. The group returned with a vengeance a year later, initially attacking police stations, and today has rear bases across borders in Chad, Niger and Cameroon.