Insurance fund to invest in cement 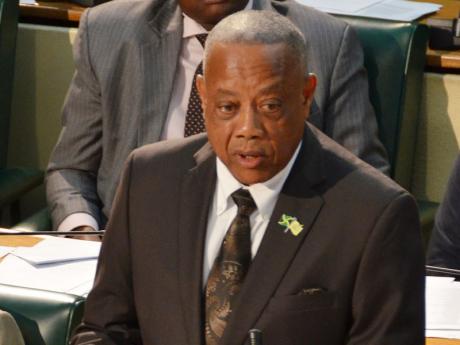 THE NATIONAL Insurance Fund (NIF) seems set to invest in cement manufacturing, with Labour Minister Derrick Kellier announcing that the entity is "actively pursuing the possibility of a major investment in a cement plant which would see the generation of some 450 new jobs accruing to Jamaicans".

Kellier, in making his contribution to the Sectoral Debate in the House of Representatives on Wednesday, said the fund, which currently contributes some four per cent of GDP, has a value of $67.5 billion as at March 2014.

The minister also said that the National Insurance Scheme (NIS) is facing a crisis of sustainability, noting that approximately $14.7 billion was paid out to beneficiaries for the period April 1, 2013 to March 31, 2014, while contributions to the scheme over the period were approximately $12 billion.

The NIF is funded by National Insurance contributions and is the source from which pensions and other benefits under the NIS are paid. NIS is a compulsory contributory funded social-security scheme which offers financial protection to the worker and his family against loss of income arising from injury on the job, incapacity, retirement, and death of the insured.

Kellier said yesterday that a "strong component dedicated to job creation, increasing export and promoting the practice of import substitution" has been built into the fund, which manages the NIS funds.

The minister said the fund will continue to partner with other agencies such as the Development Bank of Jamaica (DBJ) and JAMPRO, to develop job-creating projects.

At present, the fund is lending money to the DBJ for on-lending to the small and medium enterprises (SME) sector under a $1.5 billion SME loan programme, and is in discussion with JAMPRO about developing space for the outsourcing/ICT sector, either on lands already owned by the NIF or other greenfield investments.

"With an eye on the $1.5 billion SME loan programme, the fund will go further in the 2014/2015 financial year and target three entities and groups where the need for financing remains largely underserved, namely, the creative industries, persons with disabilities, and the youth," the minister said.

He disclosed that loans are currently being structured for persons in these groups which are affordable and are designed to encourage entrepreneurship.

The minister told Parliament that up to the end of March, NIS benefits were being paid to more than 107,000 persons - some 7,000 pensioners overseas, and some 100,000 here in Jamaica, but noted that the current system is not sustainable.