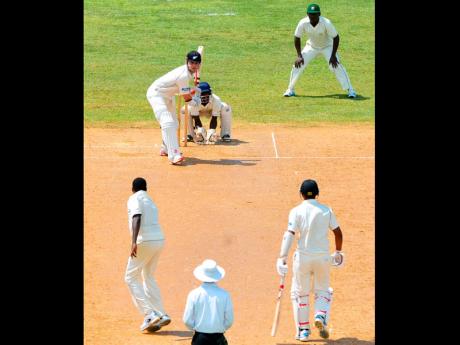 Jamaica were well on their way to erasing New Zealand's 112-6 declared on day one of their two-day practice match at the Trelawny Multi-Purpose Stadium at Florence Hall, Trelawny yesterday.

Leg-spinner Odean Brown led the way as Jamaica's bowlers restricted the tourists to less than a run a ball inside the first two hours of play.

Middle-order batsman Tom Latham was the only player to offer any real resistance. He batted for 134 minutes and faced 69 balls. Ish Sodhi made 22; and Luke Ronchi, 21.

When Jamaica batted, Shacoya Thomas 22 and Jon-Ross Campbell, 18, had an opening stand of 40 but wickets fell steadily thereafter. Number-three batsman Kennar Lewis will resume today on 31.

Mark Craig grabbed three wickets for 17 runs off nine overs, and Neil Wagner one for 18 off 4.4 overs, to peg the Jamaicans.

New Zealand head coach, Mike Heeson, said he was satisfied with the day's play, given it was their first real day in the middle since arriving.

"It was a good day for us first day out, we had to adjust to conditions quickly, which was useful, so we had a good chance to get a number of our guys out there in the middle," he said.