Brazil to 'surprise' the world 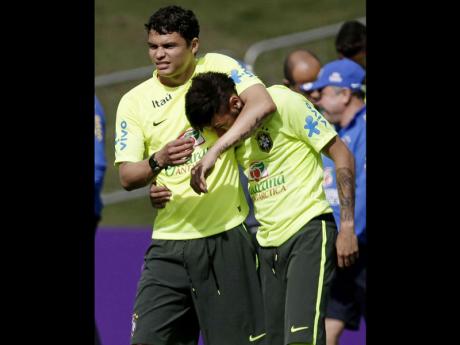 Brazil's Neymar (right) gets emotional after speaking with a special-needs children, as Thiago Silva hugs him during a practice session at the Granja Comary training centre in Teresopolis, Brazil, yesterday. AP

Brazil's Deputy Sports Minister, Luis Fernandes, said Wednesday that Brazil would organise a successful World Cup despite what he called "prejudice" against so-called developing countries as they try to organise mega-sports events.

"We are confident that Brazil will surprise the world with a successful event in the World Cup," Fernandes said, speaking Wednesday with reporters in a teleconference.

Brazil's preparations for the World Cup, which opens June 12 in Sao Paulo, have been characterised by delays in building or remodelling 12 stadiums, unfinished upgrades to airports and transportation and criticism that the $11.5 billion being spent should have been used to improve the country's poor schools and rundown hospitals.

Last week Ronaldo, who won two World Cups with Brazil and has worked with local World Cup organisers, said he was "embarrassed" by the "total confusion and lateness" of stadiums and allied infrastructure.

Fernandes defended the preparations and said the World Cup investment would boost the economy, and argued that "developing" countries are judged differently as they plan the World Cup or Olympics.

"There are sectors in society in general that have prejudice with respect to the capacity of developing countries in general ... to deliver this kind of event," Fernandes said, echoing a statement made recently by his boss - Sports Minister Aldo Rebelo.

"There is absolutely no contradiction between a developing country hosting a major event such as the World Cup or the Olympics Games, and increasing investment in education and in other public areas."

As Fernandes spoke, Jerome Valcke - the top FIFA official in charge of the World Cup - urged organisers in the northeastern city of Natal to move faster.

"Race against the clock," he said on Twitter. "We need full commitment from all parties in Natal to ensure all will be in place & tested."

Rio de Janeiro's organisation of the 2016 Olympics is also facing widespread criticism, with many IOC members speaking openly about poor planning and delays.

Brazil has a $2.5 trillion eco-nomy, and is usually listed as the world's sixth or seventh largest. The credit rating agency Moody's recently said the World Cup would have little impact on its economy, given its size and the length of the event.

Fernandes said Brazil would allow peaceful strikes or demonstrations during the month-long championship, but promised violence would not be condoned.

"We do not see any problem in peaceful demonstrations," he said. "What we cannot tolerate ... are acts of violence or vandalism, and we will have no tolerance for those."