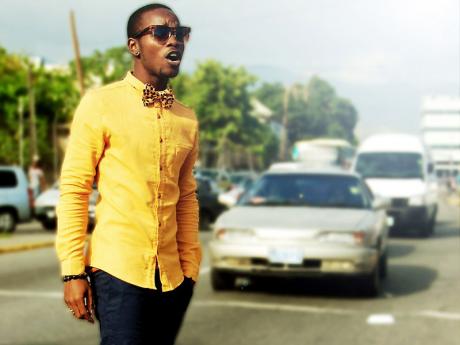 Up-and-coming recording artiste Sanity is riding high with the success of his new single Buss The Gate on the 'New Day' rhythm produced by Deadline Recordz.

The rhythm features other dancehall artistes such as Demarco, Khago, Teflon, Masicka, and Kosha.

Sanity describes his style of music as a fusion inspired by dancehall, reggae, hip hop, reggaeton, ska, mento and R&B, and says he is gunning to be a force to be reckoned with in the music industry.

"I bring a positive energy to people around me and my performances are witty and energetic," he said.

The 24-year-old singjay who hails from Vineyard Town in Kingston said Buss The Gate has been earning attention in several countries.

"I'm kicking off the year good so far. My new single has been getting good rotation on the major radio stations locally and internationally. Zip FM, Fame FM, Hot 102, UK, Portugal, Trinidad, Amsterdam, France, Ghana and Kenya, just to name a few, have been giving the single a major strength which I'm really grateful for," said Sanity.

A music video for Buss The Gate will be filmed in coming weeks. The video is expected to be produced by Guru Films and will take the form of a short movie. The artiste is also working with UIM Records and will release a single under that label called House Party.

A music video will also be filmed for that effort.

"I'm the definition of confidence. I know God has blessed me with a talent and I want to share it with the world. I'm very hard working at anything I put my mind to. I will be releasing a new single titled Pocket Fat on the 'Release' rhythm produced by DeadLine Recordz and DeadLine Recordz will also be producing my EP, SANITY DSANE1 which will be my first official compilation this August," he said

The artiste is also looking to embark on his first international tour by 2015 and is already eyeballing reggae and dancehall markets in Ghana, Kenya, Europe, Holland, Portugal, France, and Germany.