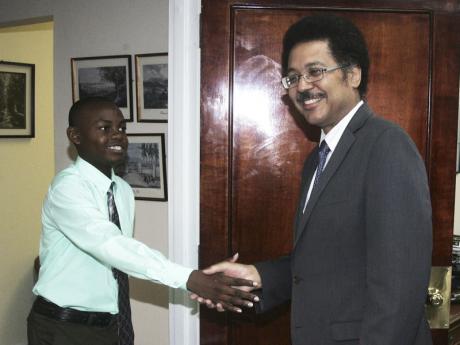 Jamaica's Ambassador to the United States Stephen Vasciannie greets The Gleaner's Children's Own Spelling Bee Champion Tajaun Gibbison on his arrival at the Embassy of Jamaica in Washington, DC, to pay a courtesy call on the ambassador on Friday. Tajaun was among the top 10 in the just-concluded 2014 Scripps National Spelling Bee Competition. -Photo by Derrick Scott

Washington DC:JAMAICA'S AMBASSADOR to the United States Stephen Vasciannie has lauded The Gleaner's Children's Own Spelling Bee Champion Tajaun Gibbison for his outstanding performance in the just-concluded 2014 Scripps National Spelling Bee Competition. He placed among the top 10.

"We see young Tajaun's performance as a vindication of the quality of education that is available in Jamaica and an affirmation of the sterling contribution of The Gleaner and coach Rev Glenn Archer to education enhancement over the years," Vascianne

'Jamaica to the World'

The ambassador pointed out that as a country, "We always celebrate the performance of our athletes and musicians on the international stage. 'Jamaica to the World' is our watchword, so it is important to stress that Jamaica is an academic powerhouse in the world and competitions like this help to reinforce that idea," he added.

Ambassador Vasciannie's comments came yesterday during a courtesy call paid by The Gleaner's Children's Own Spelling Bee champion, along with his coach, the Rev. Glenn Archer, his mother Yvonne Gibbison and Nordia Craig, manager, business development and marketing at the Gleaner, at the Embassy of Jamaica, Washington DC.

"All members of the embassy and Jamaicans all over watched the competition last night (Thursday night) with great pride as you placed Jamaica among the top 10 in the Scripps National competition. Your performance was of the highest standard making you an excellent ambassador for Jamaica," Vascianne told Tajaun.

Coach Archer said that there was a high consistency in the spelling bee programme run by The Gleaner which augurs well for the future.

"When our Spelling Bee entrants can enter the USA and do well among those who excel here, it says a lot about our country," said Rev Archer. He said the Spelling Bee programme has produced 26 national champions. "Our spellers have performed excellently over the years," he added.

A beaming and confident Tajaun told the ambassador that he was glad to have made it this far with the help of God, his parents and coach. He said he is proud to be Jamaican and to represent his country. "My wish is that next year's champion will do well and even supersede me," said Tajaun.

Tajaun finished in the top 10 ahead of 271 other entrants from the US and around the world.

Jamaica's only Scripps National Spelling Bee champion is Jody-Anne Maxwell who won in 1998.