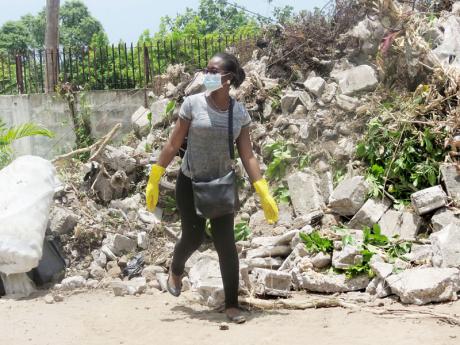 A volunteer working on the site.-photos by Shanique Samuels 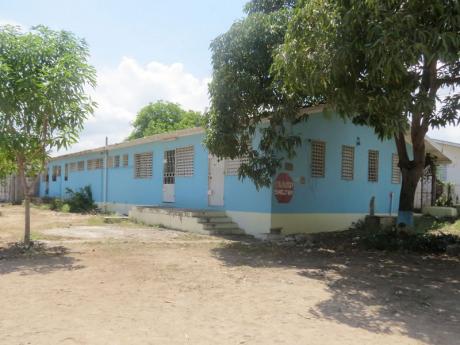 Preparations began on Labour Day to cater to Clarendon's street people at a property adjoining the Clarendon Infirmary.

Last week's efforts had volunteers from the Clarendon Parish Council, the Jamaica Fire Brigade and the National Solid Waste Management Authority working through persistent dust storms to clean a premises which is part of the Clarendon Infirmary located in Denbigh.

The intention is to reclaim an old ward, which will be converted into a facility to cater to the homeless persons.

The Parish Council's Homeless Committee, which was formed two years ago, has since its inception, sought to establish a facility for the parish's street people, and these plans received a boost recently when the council regained ownership of the defunct ward.

During the clean-up, truckloads of old bedding and debris were removed from the premises, revealing a sound structure already outfitted with an administrative area, bathroom facilities and dormitories. Meanwhile, the parish's inspector of the poor, Patricia Anderson, said she believed a lot could be done to serve the parish's homeless community with such a facility.

Anderson explained that the place needed further renovation, but in case of a disaster, it could be used temporarily. "We will need appliances, such as a deep freezer, and perhaps a washing machine. We have a few mattresses, but it will take a few more things to get it up and running."

The day's activities were aimed at getting the premises ready to facilitate the recommended infrastructural works, which will allow the parish council to begin offering, on a phased basis, an extensive range of services to Clarendon's street persons.

According to secretary/manager of the Clarendon Parish Council, Rowhan Blake, the immediate plans are to convert the front area of the building into a kitchen and food preparation area. This is where the poor relief department's Tuesday street people feeding programme will be permanently relocated.

The feeding programme currently benefits more than 40 persons who live on the streets of May Pen.

During the ensuing phases of the facility's renovation and development, service offerings will be expanded to include a shower and change of clothes, medical and psychiatric examination and overnight lodging. However, according to Anderson, the facility will have a greater impact if it were to operate as a homeless shelter rather than a drop-in centre.

The renovation of the building, together with the installation of the requisite furnishings and amenities, is expected to ultimately cost the local authority more than $4 million.