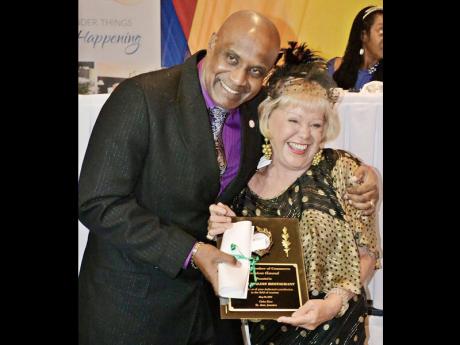 The Tourism Award is given to a member of the chamber with an outstanding record of achievement in the field of tourism who is also actively involved in civic and community affairs.

"I am thankful for the award, it shows that hard work pays off," Evita's owner, Eva Myers, told Rural Xpress shortly after receiving the award.

She added: "I've been in Ocho Rios for 25 years. I've been working hard, serving very good pasta in the most romantic ambiance, helping the community when people would come and involve me in everything, and I would happily jump in. It keeps me alive and well!"

Evita's relocated from Montego Bay in 1989 after Hurricane Gilbert destroyed the restaurant. Myers has been involved with the community since then, and is a member of the chamber and also a Kiwanian.

Myers shared the moment with her trusted and reliable staff members, Sonia Buchanan and Andrea Rose-English, who she said were instrumental in Evita's success over the years and in the restaurant copping the Tourism Award.

Buchanan has been with Evita's for 23 years, and Rise-English for 22. Myers presented them with appreciation awards for their effort.

Kumar Sujanani, owner of Gem Palace (Sundip Ltd), was accompanied by his wife, Meena, as he collected the Corporate Award.

The Corporate Award is given to a member of the chamber with an established record in good corporate principles, who is also involved with and/or supports civic and community activities.

Sujanani has been in business since 1977, and has received numerous awards for philanthropy.

The Windsor Girls' Home, the Jamaica Cancer Society, Ocho Rios Police Station and Area Two Police, St Ann Football Association, Ocho Rios High School, Special Olympics, the Rotary Club, and Kiwanis Club are just some of the organisations that have benefitted over the past 30-plus years.

Stafford and Marilyn Burrowes, operators of Dolphin Cove, collected the President's Award, which goes to a chamber member with an outstanding record of success in business, an exemplary and established record of civic responsibility and community service in St Ann.

Dolphin Cove opened in 2001, and has grown into the Caribbean's number-one marine attraction. The company has also expanded to include Prospect Outback Adventures.

Rev Sittol received the Education Award for outstanding achievement in that field on what was coincidentally his 64th birthday. Sittol entered the teaching profession 44 years ago and is still active in the field.

Some of the schools he has been attached to in various capacities include Ferncourt High, Claude McKay High, Moneague College, Waltham All-Age, Harmony Vale basic, and Coultart Grove basic.

Menghraj, as an entrepreneur, has introduced his own line of clothing, 'Mr Nash', to St Ann. The brand covers shoes, shirts and other clothing, which are sold at affordable prices. He currently operates Ash Hand Bags and Accessories.