Piscean Rocket set for a blast 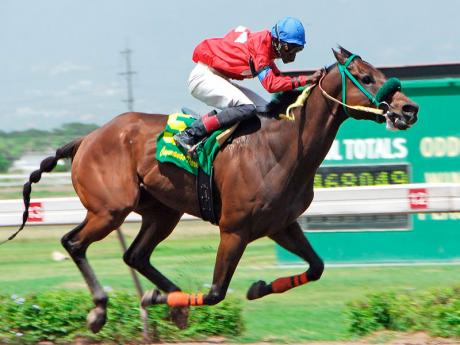 AWESOME MARQUE, running as the even-money favourite with apprentice Romario Saunders aboard, wins the second race over 1100 metres by seven lengths at Caymanas Park on Labour Day, May 23.-Colin Hamilton/Freelance Photographer

The Richard Azan-trained PISCEAN ROCKET should rebound from his near miss in the Easter Sprint Cup by winning today's Caymanas Park feature race for the G.A. 'Sarge' Bucknor Memorial Cup for overnight-allowance horses over the straight.

The race has attracted 14 starters, but despite the large field, PISCEAN ROCKET returns with so much in his favour that he is expected to go one better with champion jockey Dane Nelson aboard.

The 4-y-o son of Traditional-Starry Eyes failed by a neck to stave off FIERCEANDFABULOUS in the Easter Sprint Cup over 1100 metres on Easter Monday, April 21.

BORDER LINE, who finished a close third in that race, paid tribute to the form by winning next time out, nosing out the American horse, EL PODEROSO, who runs today from the unfavourable number one post position.

PISCEAN ROCKET returns at the convenient mark of 52.0kg. Having secured a favourable draw at post-position 11, should race close to the pace, which he should be set by the speedy RUNJOHNNYRUN, LADY LIKE and EL PODEROSO, before coming through in the last furlong for the victory.

PISCEAN ROCKET has worked well in preparation for this trophy and in the present frame of mind should lead home EL PODEROSO, as well as the ageing but very useful NEW KINGSTON and LADYLIKE, all of whom are effective over the straight.

EL PODEROSO, with 2.0kg claiming apprentice Orlando Foster riding for 14-time champion trainer Philip Feanny, has good speed and this should enable him to overcome his poor draw and carry the fight to my selection, PISCEAN ROCKET.

Elsewhere on the 10-race programme, the 3-y-o colt, THORNHILL LAD, should make amends for his below-par run as the howling favourite, behind THE CHOSEN ONE, over 1200 metres last Saturday, by winning the opening race for three-year-olds over 1800 metres.

Trained by Eddie Hamilton, THORNHILL LAD had previously won by 10 lengths over a mile in maiden company, on May 17, but weakened badly when sprinting a week ago. With little to beat in the small field of six, THORNHILL LAD should rebound at the expense of UNBREAKABLE with Cardenas up.

Other firm fancies on the card are LAPTOP to outfinish MISS JUANITA in the third race over 1820 metres; SOCIAL BUTTERFLY to stave off SOON COME in the sixth; RASTARAVEN with Georgina Sergeon aboard to win the Herald Printer's Limited Trophy race over 1100 metres, ALL THAT MATTERS ahead of ROUGH PATRICK in the eighth for maidens; and the straight-five specialist, PREMIUM RETURNS, in the nightpan.