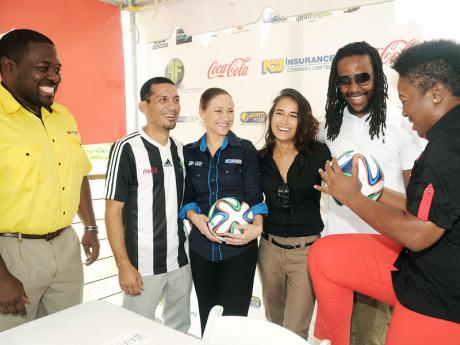 At least 100 teams are expected to participate in the inaugural Football Factory Grassroots two-day tournament next weekend at the location beside Shortwood Teachers' College on Olivier Road.

"This is months in the making, so thanks to all the sponsors for being a part of this event," Nicholas 'Nick' Ziadie, managing director of Football Factory, disclosed at the media launch yesterday at the Football Factory location.

"We are the pioneers of small-sized football in Jamaica, and we need to have it here in order to develop kids. The facility is open day and night for everyone," Ziadie, a former St George's College Manning Cup star said.

"We are happy that LIME came about with the Street Challenge Football as it gives credibility to what we are doing," he added.

Ziadie added that the competition will take the format of a 3 versus 3, with each team comprised of four players, and will be open to anybody 16 years and over.

"Right now, we have about 50 teams and we anticipate about 100 teams to be placed in groups of four for the preliminary stage. The group winners will advance to the knockout stage," he noted.

Chloe DaCosta, brand manager of Wisynco-Coca Cola, one of the sponsors, said that her company is pleased to be associated with the grassroots football tournament.

"We are pleased to be on board as we have been a part of football for 40 years. Football is a passion, so we saw it fitting to get involved. This is just the beginning," DaCosta pointed out.

Another sponsor's representative also spoke highly of the initiative of a 3v3 tournament.

"Kingston Industrial Garage (KIG), through its Ford brand, is pleased to be a sponsor of this event. This Football Factory offers a wonderful facility. We thank the organisers for working with us," Judith Denton, KIG corporate client service manager said.

Stanley Thompson of NCB Capital Markets said: "We are very passionate about this event. We are happy to be a part of this and wish success for the event."

The Football Factory 3v3 Grassroots Tournament will be held on June 7 and 8, starting at 9 a.m. on each day.