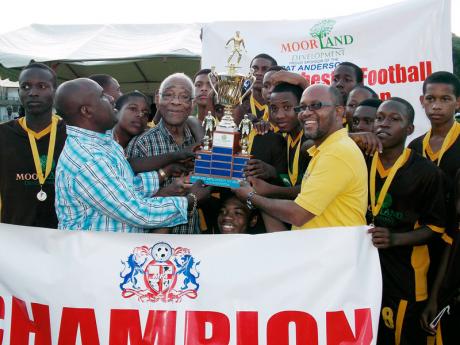 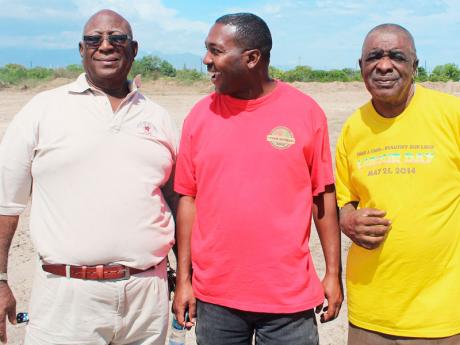 (From left) Businessman Lester 'Father Ken' Crooks in discussion with Renair Benjamin,councillor for the Westchester Division, andFitzgerald Smythe, president of the Westchester Citizens' Association, during the clearing of land to construct a sports complex on nine acres of land in Westchester in Portmore.- Anthony Minott/Freelance Photographer 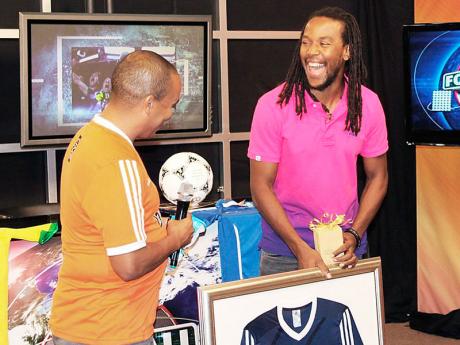 Carlo Redwood (left),vice-president, marketing, LIME, shares a joke with Ricardo 'Bibi' Gardner, former Reggae Boy and Bolton Wanderers player, who has been the face of the LIME Street Football Challenge. Gardner was also presented with a Samsung Galaxy S5 and a framed LIME Street Football Challenge jersey for his retirement celebration, which took place at CVM on Tuesday.-Contributed
1
2
3

Football is in the air! The countdown to FIFA World Cup 2014 is in high gear and the Jamaican-German Society (JGS) is grasping this opportunity to officially kickstart its 60th (diamond) anniversary with its Diamantliga, a seven-a-side football competition to be held on Saturday, June 7, at the National Water Commission (NWC) football field in Mona, beginning at 10 a.m.

Each team will play in a preliminary round, and successful teams will advance to the semi-finals, with the top two teams contesting the final in their respective zones. This promises to be an exciting competition and an enjoyable prelude to the World Cup Finals in Brazil.

This year's competition follows the society's successful staging of Futsal Meisterschaft, a five-a-side competition which saw 15 teams competing for trophies and honours in the inaugural football competition held in Germany Week, 2013. At that time, Pepsi emerged winners with the United Nations team second, while Maritime & Transport copped the bronze medal.

Conceptualised in 1954, the Jamaican-German Society, which had its beginnings as die Freunde Deutschlands (friends of Germany) has the distinction of being Jamaica's first inter-cultural friendship society. It works in close collaboration with the German Embassy, with the ambassador being a patron. The Society is primarily concerned with the teaching of the German language and the promotion of German culture through films and events.

Fifty-six teams will contest the Western Sports-sponsored Business House five-a-side football competition, which gets under way today with a dress parade at the National Water Commission (NWC) playing field, Mona.

Eleven of the 56 teams will play in division one and 45 in division two, which has been divided into four zones, owing to the large number of teams.

The dress parade will be followed by a match between the Jamaica Special Olympics team vs Scotia Bank at 3:15, and at 4 p.m., Jamaica Broilers will take on Kingston Bookshop in a Division One encounter. Matches will continue on Mondays to Thursdays each week.

Both teams were locked at 0-0 at the end of regulation and extra time, and in the resulting penalty kicks, Scotia 'A' broke the deadlock in a thrilling shoot-out to secure the $30,000 prize. Goalkeeper Jabari Wallace of Scotia 'A' won the MVP award, while André McFarlane from Scotia 'B' and Delano Allen from JIO shared the top goal-scoring award with four each.

The 2014 Business House cricket season gets under way tomorrow with the eight participating teams. They will contest the Reggae Jammin 50-overs league for which Jamalco are defending champions.

The four matches on are Jamalco vs NWC at Jamalco in Clarendon; Jamaica Broilers vs Red Stripe at Spring Village; National Housing Trust vs Continental Baking Company at Mico and Jamaica National vs Sagicor at Up Park Camp. All matches start at 10 a.m.

The teams will also contest the Best Dressed Chicken 30-over KO and the T20 competitions.

The competition was launched on Thursday evening at Sabina Park at a function attended by representatives of the Jamaica Cricket Association. In addition to long-standing sponsors, Jamaica Broilers, new sponsor Western Sports, and associate sponsors, Truly Nolan Pest Control and KLAS Radio, were introduced.

Defending Division One champions Petrojam defeated Wisynco 1-0 at Tinson Pen recently to start their campaign on a successful note. The winning goal was scored by Ramone MGregor. NWC defeated The Gleaner 2-0 at Mona, thanks to a brace from James Durrant. The Gleaner also lost again on Monday, going down 3-2 to Wisynco at the Anthony Spailding Sports Complex. Domain Ball scored twice for Wisynco and Norman Bailey got the other goal. The Thompson brothers, Locksley and Javar, netted for The Gleaner. Metrodade, meanwhile slammed promoted Division Two champions Jamaica Fire 6-0, with Corey Burke scoring a hat-trick. Scotia clipped Grace Kennedy 1-0, with Donovan Hibbert getting the winner.

Zone One teams Naggo Head and Bridgeport will battle for the fourth and final semi-final spot in the Institute of Sports Portmore Primary, Football League on Monday. The game will be played at the Belmont Primary School playing field at 10 a.m. Bridgeport have six points and Naggo Head have four points, therefore Bridgeport only need a draw to advance.

In games played last Thursday, Zone One winners, Portsmouth, defeated Independence 5-0 to end on a maximum 12 points, while Bridgeport edged Belmont Park 1-0. Waterford (eight points) and Port Henderson (six points) are the qualifiers from Zone Two. The semi-finals will be played on Wednesday at the Portsmouth school primary.

Ken's Wildflower Community Sports Club, led by manager Lester 'Father Ken' Crooks, cleared a piece of land in Westchester on Labour Day to construct a sports complex in that community in Portmore. The complex will be built on nine acres of land and will have an area for cricket, netball, and basketball.

Crooks said he loves community development and will do anything in his power to help the youth in Portmore. He called upon other businessmen in Portmore to assist with projects like these. In attendance at the event were Wilford 'Billy Heaven, president of the Jamaica Cricket Association, along with club members. Fitzgerald Smythe, president of the Westchester Citizens association and councillor for the Westchester division.

Holy Spirit Basic continued their rich form after they edged Child Plus 1-0 in Zone One of the INSPORTS Portmore Little League football competition. With the win, Holy Spirit climbed to a maximum of 12 points from four games. Harvest Temple and Waterford drew 0-0 in another match. In Zone Two, leaders Portsmouth Basic clipped Ascot 1-0 to move to 10 points from four games, and Reliance Basic blanked Glowell Preparatory 3-0.

Edgewater FC are still over the moon after they captured the Leander Marshall-sponsored Portmore Under-13 football league last Saturday. Portmore United took the lead in the first half, but Corey Robinson scored a second-half penalty to force extra time. Edgewater won 4-1 on penalties. Corey Robinson, Jamar Deacon, Rojeaux Baines and Kevon Barnett scored their penalty kicks.

"It was a balanced match; the two teams were up to the task. They had an early break and scored and when it came down to penalties, we knew we would win," said Edgewater's coach, Peter 'Uncle' Beckford. "We had competent penalty kickers and our goalkeeper, Shanthamoi Brown, is one of the best in his age group."

Word out of Montego Bay is that the athletes are "raring to go" for the big show in July. Rupert Johnson (Mr Jamaica 2013) and Angella Brown Johnson (general secretary, JABBFA) spent two days of the Labour Day weekend updating members and providing training and stage-presentation tips at the Champions Image Gym in the Second-City.

Chantomoi Taylor scored a second-half penalty for Cumberland, and Geovanni Wigan added a late strike for their team to score a 2-0 win over Westport as the Colin Fagan-sponsored Portmore Under-15 football league commenced at Passagefort playing field with four matches last Sunday.

There will be a play-off for teams that finished at the bottom of the standings. Colours Sports Bar tackle Myrtle Way, while Highlight Strikers play Chedwin Strikers at Water Park Way.

Clarendon's Jamalco will travel to Frome tomorrow to take on Reno in what is shaping up to be a key match at this early stage of the Jamaica Football Federation Red Stripe Premier League play-offs.

The second match-up of the day will be hosted in Kingston, where KSAFA's Barbican host Axum of St Mary.

Jamalco, the South Central Confederation's representative, lead the play-off series with four points following a 1-0 win over Barbican and a 2-2 draw earlier this week. Both Reno and Barbican have three points, with Axum on one.

Manchester Academy, made up of primarily Manchester High players, got a big boost towards their daCosta Cup programme when they prevailed 1-0 over Villa United to win the final of the Moorland Development-sponsored Pat Anderson Under-17 football competition.

Captain Delvarone Simpson, who could be an important linchpin in coach Donovan Duckie's side come September, scored the all-important goal from the penalty spot at Kirkvine last Sunday. It was second time lucky for Simpson, who had missed a first-half penalty.

Can Care Manchester U-15 quarter-finals

The quarter-finals of the Manchester Under-15 competition for clubs, sponsored by Can Care Pharmacy, will be played today at the Kirkvine Sports Club, starting at 1:30 p.m. Among the final set of preliminary matches last weekend, Alligator Pond slammed Land Settlement 8-0 to pip 360 degrees on goal difference for the top spot in Zone A, while Blue Mountain defeated Greenvale 3-0 to advance as one of the best third-place teams to the second round.

In other results, New Green were knocked out after a 3-0 loss to Mile Gully; Manchester Academy advanced 2-0 over Porus; Hillstars and Villa drew 1-1; while Kendal waltzed in the second round with a 9-1 drubbing of Downs.

The quarter-final matches scheduled for today are: Manchester Academy vs Comfort; Downs vs Blue Mountain; Mile Gully vs Alligator Pond; and 360 degrees vs Hillstars.

Two weeks ago, Haughton won 2-1 in the first-leg final, and although the second-leg final was more evenly contested, the game finished 1-1, giving Haughton the title. In addition to promotion to next season's Major League, Haughton pocketed $80,000.

The third-place play-off between Knoxwood and New Holland ended 1-1 in regulation and extra time. New Holland, however, won 3-2 on penalties to seal third.

Striker Francois Swaby was among the special toasts of the annual Sporting Central Academy Football Club awards held at The Verandah, Juice Beef Plaza, at Clarendon Park earlier this week.

Swaby, who is from Manchester, secured the Most Valuable Player award - a distinction for being the club's "most consistent and best-performing player for the 2013-14 season."

Swaby also took home two other awards. He was rewarded for being the club's leading goalscorer and he secured the Highest Participation Award, given for the highest contribution and participation in all activities of the club. He netted 14 goals for third position in this category for the entire RSPL.

The top defender award went to Linval Lewis, while Michael Parcells was voted the most disciplined player. The Blue Heart Award was secured by defender Dale Watson. Watson was singled out for his "willingness, vigour and passion", opting to play on for the season after sustaining a broken nose during an RSPL encounter against Tivoli Gardens on March 19.