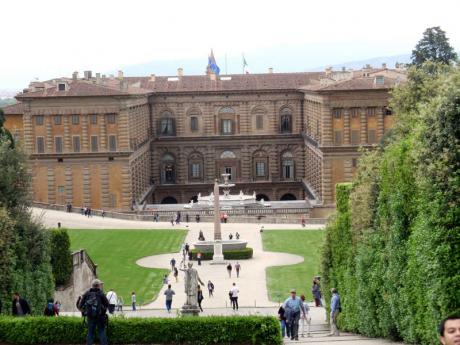 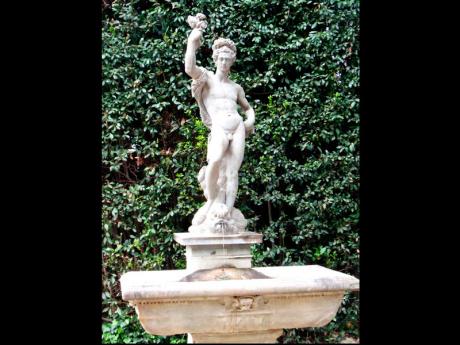 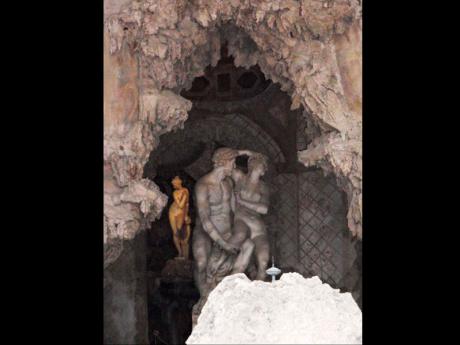 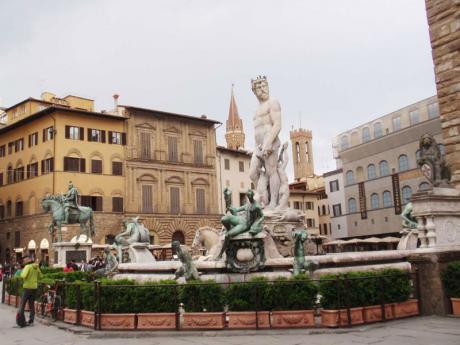 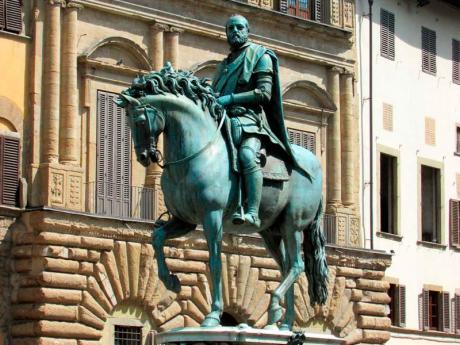 Statue of Cosimo I de Medici. 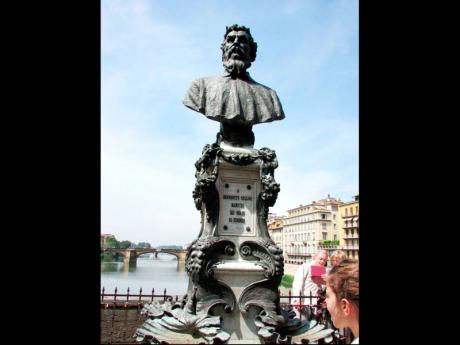 Bust of Benvenuto Cellini on the Ponte Vecchio overlooking the Arno River.
1
2
3
4
5
6

I'll remember Florence for church bells ringing across the air, especially lovely on a Sunday noon while resting in the Boboli Gardens overlooking Pitti Palace, birdsong intermittent with the bells.

We'd planned to visit this complex of seven museums in Florence's largest palazzo which once housed Luca Pitti, a mid-15th century banker, and then Eleonor of Toledo, the wealthy wife of Cosimo I de Medici.

We'd been told we wouldn't need to pre-book tickets for this museum but the concierge had forgotten the April 25 national holiday. We learned the hard way to book entries online for admission without a wait.

The queues were so long I returned Sunday morning when I hoped people in this most Catholic of countries would be at church, and was rewarded by having the fantastic Grande Grotto almost to myself so I was able to peer deep into the third chamber to view a beautiful statue of Venus.

We benefited from knowledge gained during our second day's guided tours of Florence's most famous museums. Rosalynd Pio, our somewhat eccentric, elderly but utterly entertaining Anglo-Italian guide for Galleria dell'Accademia and the Ufizzi
brought the soul of Florence alive with her explanations of how Firenze
became an important trading city on the route between Rome and northern
Europe.

Describing
art as history, she referenced classical Greeks and Romans. Once the
human body had been depicted realistically, but when the Catholic Church
held sway through the medieval ages, statues were clothed, painted
figures flat, and God's purity denoted through gold backgrounds, often
of Mary and baby Jesus.

The intricacies of Florentine
politics are too arcane to go into detail, but Florence avoided
destruction during regional rivalries, even outlawing the cruel
Inquisition within its realm. She explained this while discussing
various artworks in detail.

As Florentine merchants
and organised guilds of skilled workers, especially in the wool and
textile trade, gained more influence than the aristocracy, Florence
became a city republic. Banking was enormously important and the
Florentine gold florin, first minted in 1252, became the most important
currency across much of Europe.

Florence's prosperity
led to a period of building, and the creation of the Palazzo della
Signoria or City Hall and the Duomo of Santa Maria del Fiore were
financed not by the Church but by the city of Florence
itself.

The Oxford English Dictionary
defines the Renaissance as "the revival of art and literature
under the influence of classical styles in the 14th-16th centuries", and
Florence flowered as the greatest example of a Renaissance city, with
the Medici family emerging as the most powerful clan, ruling Florence
over a three-century period.

In keeping with the custom of ostentatious
display of wealth, they provided support for the creation of some of the
world's most magnificent works of art by Michelangelo Buonarroti,
Leonardo da Vinci, Sandro Botticelli and
others.

Moving from Gothic art of the middle ages into
more representational paintings and statues, science and art merged
during the Renaissance to create works now demonstrating a sense of
proportion, perspective and appreciation of the human
body.

Michelangelo's painted Sistine Chapel ceiling in
Rome may be better known, but his 17-foot-high marble sculpture of the
nude biblical hero David (1502-1504), started when Michelangelo was just
26 years old, renders crowds even today silent with
awe.

First mounted in front of the Signoria, now
called Palazzo Vecchio or Old Palace, a replica stands there after the
original was removed to the Accademia. Italy's National Research Council
just announced that the move there probably caused recently detected
micro-fractures in the ankle and leg areas.

Fears of
David's collapse are downplayed. Perhaps the sooner you see it before
restoration is needed, the better.

I didn't realise
that far from being a starving artist, Michelangelo actually became very
wealthy, supporting his family with numerous
properties acquired over his successful
career.

Using her cane and commanding presence,
Rosalynd navigated our small group through the rooms of the Accademia in
the morning and then, meeting again in the late afternoon, the Ufizzi
where Botticelli's painting 'The Birth of Venus,' the famous nude rising
from a shell, takes star position among masterpieces by Michelangelo,
Raphael, Leonardo, Titian, Caravaggio, and
Rembrandt.

You enter from the Piazza della Signoria so
take advantage to admire not only Palazzo Vecchio with its beautiful
tower which acts as a counterpoint to the Duomo in Firenze's skyline,
but also admire Ammannati's fountain with Neptune, god of the sea, as
the centre piece.

Beside it, the Loggia dei Lanzi
arches cover Giambologna's Rape of the Sabine Women and other striking
statues.

Cosimo I de Medici commissioned Giorgio
Vasari to design a structure bringing all the administrative offices or
ufizzi together, and what was once an administrative centre is now the
Ufizzi Gallery, founded upon the Medici family art collection. Across
the piazza you'll remark on the bronze equestrian statue of Cosimo I,
who moved into Palazzo Vecchio in 1540 to emphasise the Medici family
power in Florence.

Then he moved across the Arno River into the
Pitti Palace. His alliance with the Holy Roman Emperor Charles V in Rome
assisted him in becoming the Grand Duke of Tuscany, with Tuscany under
Florentine control.

The statue honouring Cosimo I,
commissioned by his son Ferdinando, created by Giambolgna, and erected
in 1598, was numbered among those works of art saved during World War II
by the Monuments Men, recently celebrated in
cinema.

No visit to Florence could be complete without
a return to Ristorante Sabatini, the 100-year-old venue we'd enjoyed 38
years before with Sam and Rosie Mahfood.

Beloved by
locals and film stars alike, framed tablecloths with celebrity
signatures line the foyer. We just strolled up Via de Tornabuoni, the
main avenue for elegant shopping in Florence's fashion district, adorned
with pots of lovely pink flowers, and on Via Panzani, Sabatini's
co-owner Carlo Lazzerini greeted us warmly in the still delightful
wood-panelled restaurant with its charming winter garden, a perfect
ending to our Florentine adventure.

To book
our guide: rosalynd.pio@gmail.com