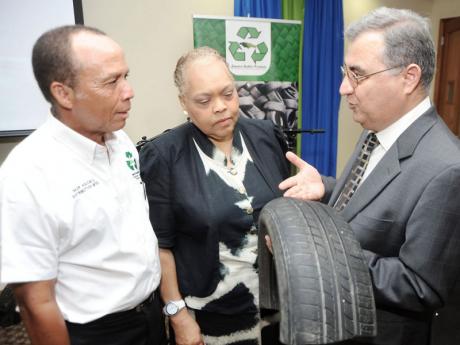 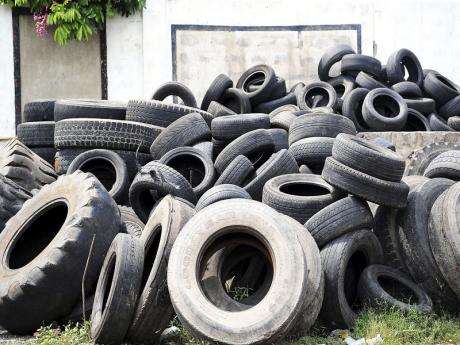 The recently launched tyre-recycling initiative will reduce the number of old tyres available for persons to set on fire. - File 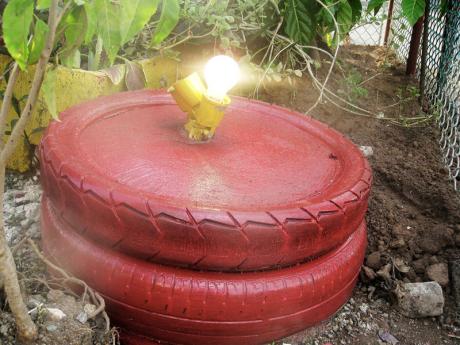 A light fixture in a cement-filled tyre base at the entrance to Veggie Meals on Wheels, Regal Plaza, Cross Roads, St Andrew, demonstrates one of the many creative ways in which old tyres are used. - File
1
2
3

Disposal of waste tyres across the island could become an income-generating and environmentally friendly initiative in July, when a recycling plant for discarded tyres comes on stream.

SKDP Haulage and Distribution Limited, the company spearheading the recycling initiative, announced last Wednesday that it will recycle discarded tyres to create various products, some of which will be used to repair Jamaica's road surfaces while others will be exported to generate foreign exchange.

SKDP launched its Jamaica Rubber Products initiative at the University of the West Indies, Mona campus, Council Room under the theme, 'Recycling for a Sustainable Economic Future'. This signals the company's intention to provide a viable option
to dispose of old tyres.

Sherold Philibert, CEO of
SKDP, explained that research findings prompted the recycling effort.
"SKDP, having researched the problem of waste tyre disposal for the past
two years, took a decision to establish a waste tyre recycling
operation at its main location in Discovery Bay, St Ann.The operation is
expected to commence by the third week in July and installation of the
production line will start during the second week in June. It should
take approximately three weeks to be completed," he
said.

A collection drive has already started, with
some local dealers committing to provide old tyres. More than 12,000
have been collected so far. "Over the past two months, we have collected
waste tyres from dealers, tyre repair shops and other locations
islandwide. We have made contractual arrangements with several tyre
dealers to collect their waste tyres," Philibert
said.

Philibert
explained that Jamaica Rubber Products will use what he calls the
ambient method in recycling tyres. "This will begin with the debeading,
or removal of the tyre from around the rims. It will end with the
production of rubber powder of various sizes. Rubber powder is often
referred to as crumb rubber," he said.

"The production
of crumb rubber derived from the recycling will create a product that,
when added to asphalt mix, will increase the viscosity of the asphalt
binder. This will make our roads stronger and longer
lasting."

Motorists will enjoy the benefits for years
to come Philibert said. "Road tests done have proven that asphalt rubber
is stronger, safer and lasts up to twice as long as standard asphalt.
It permits a quieter drive on road surfaces and is much less brittle
than the conventional asphalt. It is also much more resistant to ageing,
because the rubber is believed to slow the asphalt's oxidation
process," he explained.

Dr Shakir Shatnawi, chief
executive officer of SHATEC Engineering Consultants, a Canadian company
contracted by SKDP, outlined how much using rubber can contribute to
maintaining a quality road surface. "The benefit of rubber over asphalt
is it can undergo five times the strain before rupture. So if you are
pulling asphalt and you are pulling it like a gum, with rubber you are
going to have to use five times more energy," Shatnawi
said.

Shatnawi
noted that recycling tyres will significantly reduce health risks caused
by burning them, an all too common method of getting rid of old tyres.
"Fire hazards and related environment damage are significant. A lot of
the damage is irreversible. A lot of it has to deal with health issues,
asthma and cancers. The particles that come out of the rubber are very
dangerous when it is burning. The air pollution, carbon dioxide and
mosquitoes are issues that will be taken care of," he
said.

"Every tyre contains about a gallon of oil and
that fire is hard to extinguish," he added.

In a
previous Gleaner story, it was reported that the St
Catherine Health Department was going on an old-tyre disposal drive,
concentrated in Spanish Town and Portmore. Richard Baker, chief public
health inspector for St Catherine, said then that "Once water gets into
them they are an ideal breeding place for mosquitoes. The colour of the
tyres also attracts the mosquitoes. They like the environment and will
breed."

Philibert noted that the recycling of waste
tyres will free up space at landfills. "Tyres use a disproportionate
amount of landfill space and, because they take decades to degrade, they
pose significant concern in Jamaica where there is a shortage of
landfills," he said.