Bain again: What would Rex Nettleford have done? 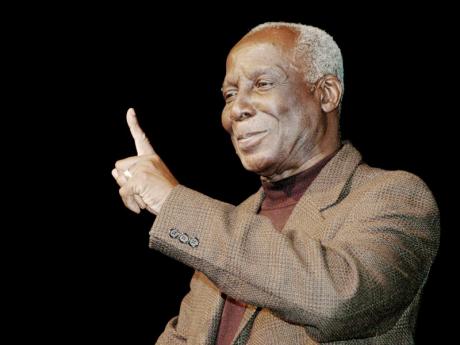 Former Prime Minister P.J. Patterson, a man of impeccable credentials, has addressed the backlash over the termination of Professor Brendan Bain, by the University of the West Indies (UWI), from his position as head of the Caribbean HIV/AIDS Regional Training (CHART) Network, an externally funded entity based at UWI.

Bain's post-retirement contract was terminated because he gave testimony in a case where a gay Belizean challenged his government's buggery laws. Though truthful and accurate, myriad interest groups argued that the testimony was in conflict with his role as director. Faced with pressure, the UWI bowed and apparently followed the dollar.

Patterson, who first tasted parliamentary victory in 1972, became Jamaica's second People's National Party (PNP) prime minister in 1992 and last won in 2002, is a man of peace and conciliation. He also was in government when two critical pieces of labour legislation were passed: the Employment Termination and Redundancy Payment Act (ETRPA) 1974 and the Labour Relations and Industrial Disputes Act (LRIDA) 1975.

As prime minister, he also saw the ascendancy of Rex Nettleford, the poster boy of the UWI for more than four decades, to the position of vice-chancellor in 1996, which he held until two years after P.J.'s last electoral victory and two years before Portia Simpson Miller succeeded P.J. Of the two most distinguished aspects of Rex's lifework, it is not dance, which began in 1962, that is of import. Rather, it is his concurrent stellar scholarship in trade union/worker education, which would have moved him to opine on the Bain saga.

Rex was a firm believer in due process and tolerance: thus he would have been on the same page as Patterson, who considers buggery "an issue ... where people have very strong positions, but we have to find a way of moving away from polarised positions into one that accepts that differences of race or colour, differences of class ... in terms of sexual preferences may have to be addressed in conformity with the prevailing global environment in which we live."

For P.J., "Those who wish to have changes must accept the right of persons to speak freely, reflecting their convictions and they can't expect to have all the say going one way, they must expect others to have contending positions." And, with measured clarity, he asserted, "At the bottom of this is ... the duty of a professional person in giving expert evidence to base that testimony on reliable analysis and a full flow of information."

Last week on radio, I asked the chairman of the National AIDS Committee for the evidence that the maintenance of buggery laws "... is shown to prevent access to treatment, care and support". As with Bain's testimony, I could not find it. Nevertheless, the issue is that the stakeholders, holders of the stake and steak, lost confidence in Bain and pushed UWI to jettison this well-decorated hero of the fight against HIV/AIDS. While, I truly understand the position of the UWI, because pipers and tunes do correlate, there is a larger question of justifiability and fairness.

With contracts of employment, the issue of its termination is not a simple one. According to case law, a dismissal is lawful or rightful if is done with appropriate notice or for just cause. The first is easy. Nowadays, most contracts have agreed periods of notice. If the employer wishes to terminate prematurely or without notice, pay in lieu thereof is a substitute.

However, cause is a different kettle of fish. Plausible reason must follow the rules of natural justice. Improper procedures can invalidate otherwise just dismissals. Still, our system has evolved past case law. Section 12 (5) of the LRIDA makes it clear that dismissals, notice apart, must be justifiable before the Industrial Disputes Tribunal (IDT). If unjustifiable, it can award reinstatement, compensation or both. Justification must come from factors internal to the contract. The worker must have been found to have misconducted himself or brought the entity into disrepute.

More interesting is that under Section 3(5) (a) of the ETRPA, "If an employer does not terminate a contract of employment without notice during the first four weeks after he becomes aware of the conduct ... he shall not thereafter terminate the contract without notice by reason of that conduct." So the $22-million question is, why is it that Bain's 2012 testimony is such a humbug two years later?

In some cases, extraneous factors, such as clients' unwillingness to interrelate with the supplier if the worker remains, acts of God, and protracted illness could 'frustrate' the contract and cause the employer to justifiably terminate. Is this such a case?

Nonetheless, under Section 2 of the LRIDA, other workers of the UWI can make the dismissal a subject of their own dispute and bring it before the IDT.

Anyway, all of these principles regarding dismissal I taught for 20-odd years under the aegis of the Trade Union Education Institute, while Rex directed it. The Rex I knew would have taken a hard look at the delayed objections and perhaps acted like Jesus in Matthew 4: 9-10. Rex, for all his flamboyance, was never homophobic; yet he never accepted that Jamaica was as anti-gay as we are typified and never advocated the repealing of the buggery law.

In a 2004 interview, reacting to a maligning report titled 'Hated to Death - Homophobia, Violence and Jamaica's HIV/AIDS Epidemic by Human Rights Watch', he stated, "I think there are far more things to worry about in this country in terms of mutual respect, and self-respect and finding a place and a purpose rather than spending so much time on this." Furthermore, "... many productive people ... have that preference. What is the big thing? The wasting of time on the discussion is what will deflect us ... ."

In the final analysis, is the UWI or the fight against HIV/AIDS better off with Bain gone? Gimme two years to answer you.