Resurrecting the dead with high science 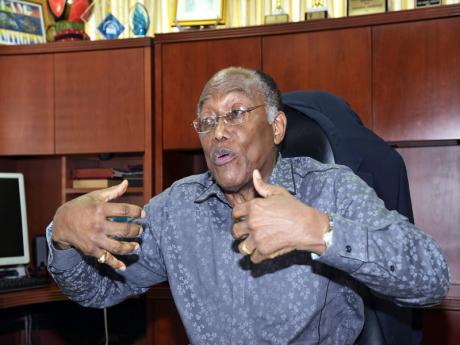 Can Errol Morrison work miracles? Martin Henry has his cup ready and waiting for water to turn into wine!

Tomorrow morning, Professor Errol Morrison should be starting out as director general of the National Commission on Science and Technology (NCST). Technically, he remains head of the University of Technology (UTech) up to February 2015 when his contract expires, as he is on secondment to the NCST.

A sort of brazen (made of brass, as opposed to gold) parachute providing safe exit out of the warfare between staff and top management at the university.

The NCST grew out of a 1991-1994 UNDP six-country project for which I served as Jamaica's national project coordinator. When the Patterson Government, with the prime minister himself serving as chairman, declined to support the NCST with state financing for research and development beyond administrative costs, it was obvious that the commission had no bright future. And it didn't.

The state of the commission today, 21 years on after its establishment, is perhaps best reflected on its seriously outdated website. The chairman is still listed as 'The Most Hon Bruce Golding, Prime Minister of Jamaica', with his minister of industry, investment and commerce, Karl Samuda, as vice-chairman!

A key element of the NCST's mission, that redundant website boldly declares, is "mobilising and allocating resources to the scientific community".

Errol Morrison is a physician and may be able to heal the sick - although diabetes, his speciality, has no cure. He is not, however, the Great Physician, and may not be able to raise the dead - certainly not without state support for financing S&T research and innovation for development, as is the norm in the advanced and rapidly developing countries.

Now that the minister with responsibility for S&T has been relieved of the taxing load of the 381-megawatt electricity-generating project, he may be in a better position to listen. The several special funds are rich sources of public money for relatively small contributions to R&D in their own areas of concern: TEF, UAF, HEART Trust, etc, and the special case of the NHT, which, strictly speaking, is not public money.

The country should adopt the practice of attaching a relatively small R&D levy on to the international contracts for services to the GOJ which companies like the successor to EWI would be required to pay as a relatively painless cost of doing business. Their operations in Jamaica would thereby leave a tangible legacy of development through the development and applications of S&T.

We can go the same route of negotiating with donors the allocation of portions of grants to research and development as standard procedure. Minister Paulwell, can you hear me?

Last Emancipation Day (well timed for the significance of the day; badly timed for readership), The Gleaner ran my piece, 'Science research fund crucial to development'. I want to substantially rerun the content of that piece for the rest of this column with a bit of editing and updating here and there:

More and more developing countries are setting up research funds. Jamaica does not yet have such a research fund.

Over the years, our country has established a wide range of 'research' institutions supported by subventions from the public revenue which mostly pay for salaries and day-to-day operational expenses. The country has never had a research fund from which competitive research grants can be made.

One country which is operating a highly successful and productive national research foundation is South Africa. Its website is http://www.nrf.ac.za. From direct contacts, Professor Morrison and I are very familiar with the South African NRF.

The South African NRF was established towards the end of the Nelson Mandela one-term presidency in 1999, pulling together a number of earlier agencies serving various research sectors and expanding their roles.

"As an independent government agency," the agency's website says, "the NRF promotes and supports research in all fields of knowledge. It also conducts research and provides access to National Research Facilities. The NRF provides services to the research community, especially at higher education institutions (HEIs) and science councils with a view to promote high-level human capital development. The NRF aims to uphold excellence in all its investments in knowledge, people and infrastructure."

The Research Fund was created by the National Research Foundation Act (Act No 23 of 1998). According to Section 3 of the act, the object of the NRF is to:

"Promote and support research through funding, human resource development and the provision of the necessary facilities in order to facilitate the creation of knowledge, innovation and development in all fields of science and technology, including indigenous knowledge, and thereby to contribute to the improvement of the quality of life of all the people of the Republic."

Sounds a lot like our NCST, except that the South African government is backing the talk with good money. In the 2011/2012 financial year, the NRF of South Africa handled a total budget of 2.1 billion rands (about US$235 million, or J$23 billion, at the then exchange rates).

Ideally a percentage of the annual budget should be earmarked for a research fund if the country is serious about [S&T] as a key driver of growth and development. The research fund is separate from operational subventions to research agencies and would be managed by an independent centralised agency like the South African National Research Foundation. A mere one-tenth of one per cent of the 2014-2015 budget would provide $540 million for the research fund. Even one-tenth of that one-tenth would be a start.

Another potential and attractive source of financing for research has been recommended to MSTEM. It is earmarking a portion of the many special funds held by Government to support research: funds such as the HEART Trust Fund, the National Housing Trust Fund, the Universal Access Fund, and the Tourism Enhancement Fund. These are, by definition, 'development funds', and a case can be made that research conducted in areas related to the fields of operation of these funds can benefit these areas of development. Where legislative amendments might be necessary, these should be pursued.

One thing is certain, if Jamaica does not discover that a dedicated research fund is vitally necessary to support the national research agenda, as more and more countries at a similar stage of development are discovering, the hopes attached to [S&T] plans and policies and road maps will fare no better than the Vision, Mission and Objectives of the cash-starved failed NCST.

Medic Morrison's biggest challenge under the grand title of national director general of science and technology is not to demystify science, as he himself has explained his role, from a desk in the backwoods of the Ministry of Science, Technology, Energy and Mining to which he has been relegated at the tail end of a distinguished career. His key task is to get action money into science and technology. Forget the rat-messed files, Professor. Start afresh, and go see the minister about money - and take this column with you!