Pain. Pride. Prostitution - Broken dreams, abuse and the wide-open door to hustling on the streets 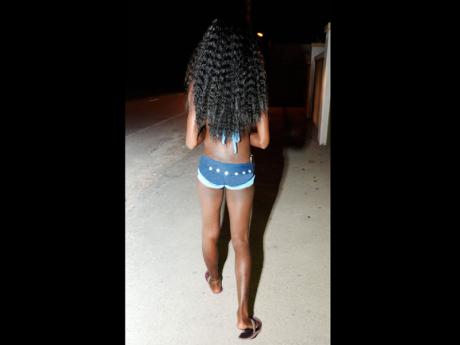 Tracey Knightis now 22. She had dreams of working in the hotel industry. Her friend Stacey-Ann Jamesis 21. She dreamt of working in a top-of-the-line food establishment.

Today, the two young women number among the hundreds of Jamaicans who beat the streets daily, their naked flesh is their merchandise, sexual favours earn them a livelihood.

For Tracey, her dream died at age 13, when she was kicked out of school after being caught having sex with a mature man in a car.

"When I went back to school the following day, the principal called me to her office and on the top of her voice told me that I was a 'disgrace to the school' and was not to come back," Tracey told The Sunday Gleaner.

"Normally, when a teacher calls you to her office, they are supposed to remove everyone, but everyone was there, some in detention, so everyone heard what she said and all the kids were laughing.

"I was ashamed, because coming from a poor family and going and doing that and get caught, it kind of looked bad on my family, so I ran away," added Tracey.

Her life entered a downward spiral from the day she was escorted home by the guidance counsellor.

"I think the decline started from when the principal sent me home. And then everyone cheering and laughing like it was something good. That lady (principal) is from the pit of hell," said a still angry Tracey.

"I was already having sex at 13, but the key point is that she went ahead and broadcast it to the whole school, so I couldn't walk in peace.

"It really messed me up because all my dream of a future was gone. I started thinking about man and was boxing here and there. It really shocked me."

Stacey-Ann's dreams started to die at age 12, when five men raped her and got her hooked on sex.

"I did not behave myself after that. I would go out and come back in late," shared Stacey-Ann.

"My mother took me to a police station and they gave me a probation officer. They said if I still didn't behave, they were going to send me go to a [children's] home."

Stacey-Ann soon
found herself in trouble again and her probation officer was called in.
The probation officer took her before the court and "the judge sent me
to Granville (Place of Safety) until the next court
date".

"When I went up there (Granville), some girls
were asking me questions, and because I was not answering them, they
beat me with board and stuff. So that caused me to run away from that
home," added Stacey-Ann.

"I went back home to my mother and the probation
officer came and send mi go Freeport (police lock-up). I was down by
Freeport for more than six months, and on the court date, dem send mi to
the Maxfield Girls' Home."

She said the treatment she
received at that facility was painful as she was involved in fights and
placed in solitary confinement for long
periods.

Stacey-Ann was later sent to St Ann's Bay
Girls' Home, where she said more mistreatment caused her to run away
from the facility for a life on the streets.

She soon
became pregnant, and with the birth of her child, she returned home to
her mother.

"Even after I had my first daughter and
went back home, the probation officer came back to my yard fi mi,"
shared Stacey-Ann.

"My mother told them that dem nah
tek mi out this time, because a bare ill-treatment mi get, and when mi
tell dem, nutten nuh do bout it.

"Children's home is a
place where they should protect you and things a happen to you, so nuff
girls run weh from there because of the ill-treatment weh dem a
get."

Stacey-Ann is now the mother of two daughters, a
six-year-old and a four-year-old, who live with her
mother.

Tracey, who lost both of her parents to
HIV/AIDS at a very young age, has a four year-old son living with her
grandmother.

Now the two young women whose dreams died
early will tell you that they are commercial sex workers, a career
which never entered their minds when they dared to dream many years
ago.

"I met this girl who was a go-go dancer and she
say, 'Mi can mek yu mek money, u know, girl', and she carry mi go di
club weh she did a dance when I was 17," Stacey-Ann
revealed.

"So I went to the club and danced and then
she started tell me that I can have sex wid man fi money. She set mi up
pon a big man and him offer mi $4,000, but mi tell him say mi nah do it,
a jus dance mi a dance fi mi money. And she say, 'No, girl. That alone
can't help you. You have to see if you can mek money off yu own', and
that is how she started getting to mi and mi start sell mi
body."

Tracey was also lured into the sex industry by a
friend.

"One day she said to me, 'My girl, I have a
spot where I mek money enuh'," Tracey recounted.

"Then
I wasn't thinking and the money did sweet mi and it motivated me to go
more until I end up in this job."

For Novia Condell-Gibson, UNICEF Jamaica's
Adolescent Health and Empowerment Programme specialist, the lack of
educational opportunities and their traumatic sexual background might
have significantly contributed to the path taken by Tracey, Stacey-Ann
and many other Jamaican girls who seek to trade their
bodies.

"These girls leave school without any
marketable skills, or not having been able to participate in some
post-graduation programme that would have enabled them to gain a skill.
Of course, not everybody who is uneducated and without skills go that
route," Condell-Gibson told The Sunday
Gleaner.

"And having had some very traumatic
sexual experiences in their youth - like sexual abuse - you find very
often that the girls will have very low self-esteem. Girls with low
self-esteem are a little more vulnerable to get into those sort of
situation (prostitution) than girls who are confident about themselves
and who they are."