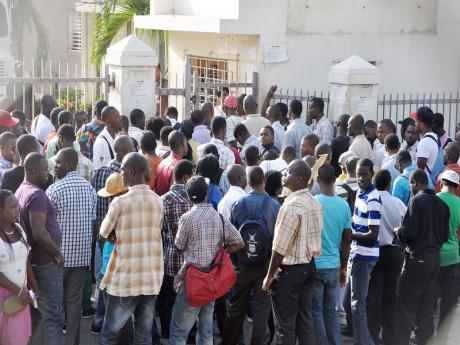 Scores of persons at the Ministry of Labour office on East Street, Kingston, for farmwork recruitment interviews. - Jermaine Barnaby/Photographer

A leading recruiter of Jamaican workers for farms in Canada has opined that the planned reform of the programme there is unlikely to cause major dislocation for Jamaicans.

Ken Forth, president of Mississauga's Foreign Agricultural Resource Management Services, has been quoted in the Canadian press as saying the seasonal workers programme doesn't allow overseas workers to take jobs that Canadians want.

According to Forth, a requirement to take part in the programme is that farmers must prove they were unable to find Canadians willing to do the work.

"There's not a lot of Canadians looking for seasonal work, they're looking for full-time (employment)," said Forth.

Canada's Employment Minister Jason Kenney recently met with stakeholders about possible changes to the Temporary Foreign Worker Programme after a research by the Alberta Federation of Labour found that employers across Canada are paying temporary foreign workers below the required wage level.

Despite the developments in Canada, Jamaica is pushing ahead to send and increase the number of workers on the overseas employment programme.

Prime Minister Portia Simpson Miller, speaking in the Budget Debate last month, said 14,000 Jamaicans were employed in the overseas work programme last year, and that based on the liaison service in Canada and the United States (US), that number is projected to increase to 16,000 this year.

In the meantime, the Issues and Trends in the Labour Market report, which was tabled in the House of Representatives last Wednesday, noted that the number of workers deployed to the US and Canada decreased to 11,344 in 2012 from 11,962 in 2008.

The report said that in relation to the US Hotel Work Programme, there was a sharp decline in the number of vacancies filled in 2009 with 359 compared to 1,738 in 2008.

"This occurred as a result of the recession in the United States which resulted in shutting down of several businesses as well as reduction in tourist arrivals. Since then, there has been an increase in demand for workers," the report said.

It added that the number of overseas employment for the US Farm Work Programme and the Canadian Farms and Factories programme declined in 2009 relative to 2008. The report said there was also a decrease in 2012 relative to the previous year.

"The Canadian Skills and Hospitality Programme began with 24 participants in 2008 and increased to 311 in 2012. Some of the workers which were in demand for the overseas market in 2012 included truck and transport mechanics, auto mechanics, welders, meat cutters, restaurant workers, and tyre technicians," the report said.

Meanwhile, Kellier announced in the House of Representatives last Wednesday that members of parliament (MP) have been given farm work application forms to distribute to constituents who are desirous of working on the farm work programme in the United States or Canada.

Each MP who represents a rural constituency is being given 40 forms to distribute to healthy persons between the ages of 21 and 45 who have farming background, a clean criminal record and are literate. MPs who represent urban constituencies will get 20 forms.

Kellier said the forms should be issued to farmers or persons with farming experience, telling legislators that those persons "stand the greatest chance of convincing the US and Canadian authorities that they are bona fide toilers of the soil who are deserving of the opportunity to travel abroad to practise the craft.

The pre-selection exercise for both Canadian and US Farm Work programmes will take place at the Ministry of Labour, East Street, Kingston, from July 7 to 28.

Prospective candidates for the Farm Work Programme should:

Farm work forms must be completed and submitted to the labour ministry by June 16, and should be accompanied by a passport-sized photo of the candidate and a character reference from a former employer, a justice of the peace or a security officer.