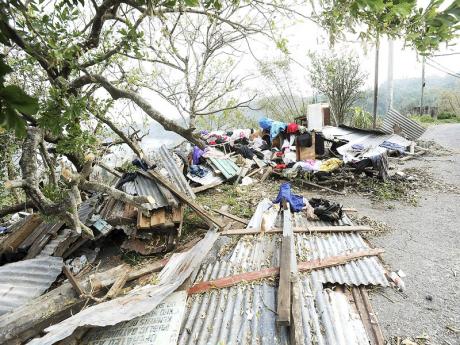 The destroyed home of Corena Stewart in Grange Hill, Portland, after the passage of Hurricane Sandy. - File

As the country braces for the 2014 hurricane season which begins today, various stakeholders have urged Jamaicans to exercise caution and not take risks in instances of severe weather.

Charles Buchanan, corporate public relations manager of the National Water Commission (NWC), told The Sunday Gleaner that while the entity has been working assiduously to be on top of any eventuality that may occur, it is imperative that citizens be realistic.

"With the advent of climate change, despite our best efforts anything can happen. We try our best to be prepared for any eventuality; however, it is the harsh reality that our water systems are highly vulnerable to extreme weather events," said Buchanan.

"We want to alert the public that in the event of the island being impacted by severe weather conditions, water supply is likely to be disrupted and I urge persons to prepare and not to make the faulty assumptions that everything will be all right," added Buchanan.

He also warned that good environmental practices are crucial during this time, as this will go a far way in decreasing damage that might result from a storm.

"Store enough water for use to up to seven days, and I want to make an appeal to citizens not to block the drains and gullies. Bad habits, dumping in drains and gullies, will result in flooding which will not only damage our water supply infrastructure and sources but will also damage homes and properties," said Buchanan.

In the meantime, Shelly-Ann Harris, senior communications manager for Digicel Company, says the telecommunications firm is committed to keep to its practice of putting its customers first.

"We take the hurricane season very seriously, so when it comes around to this time we start planning from about April, looking at our preparedness plan to see if there needs to be any changes, so we try to be informed and cater to our customers accordingly," said Harris.

"For us it's not only about telephone service, but we plan to continue our efforts to reach out to persons who might be severely affected, whether it's assistance with tin food, going into communities to charge phones, among other things."

Meanwhile, Richard Thompson, acting director of the Office of Disaster Preparedness (ODPEM), said there will be a renewed focus on the vulnerable groups in society this year.

Thompson told The Sunday Gleaner that it is imperative that children, especially, have an appreciation for disaster preparedness and how to keep safe.

"What we are looking at is engaging the ministry (of education) to see how best disaster preparedness can be included in the curriculum. We want to move away from the 'nine-day wonder' that happens when it comes around to this time of year," said Thompson.

"We have been working with the Disabilities Foundation in implementing strategies that will ensure that members of that community are not at a disadvantage should a disaster occur. I believe disaster preparedness should be an ongoing process, where persons are constantly engaged as to what can be done to protect themselves and communities," he declared.

The United States National Oceanic and Atmospheric Administration (NOAA) is forecasting a near-normal or below-normal season.

NOAA predicts a total of eight to 13 named storms, with three to six developing into hurricanes and one to two intensifying into major hurricanes of Category 3 or higher.

The seasonal averages over the past 20 years are 12 named storms, six hurricanes and three major hurricanes.

The NOAA's Climate Prediction Centre said the main driver of this year's outlook is the anticipated development of El Niño this summer.