The making of a seamless merger 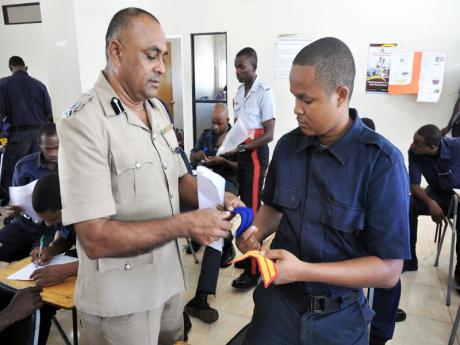 Assistant commissioner of police in charge of the Mobile Reserve, Winchroy Budhoo, helps a member of the Island Special Constabulary Force switch his blue stripes for the red and gold of the Jamaica Constabulary Force, signalling the merger of the two forces. - File

The merging of the Island Special Constabulary Force (ISCF) into the Jamaica Constabulary Force (JCF) has been successfully completed, and contrary to news reports that the process was flawed, ill-timed and messy, the initiative should be recorded as one of the most seamless and effective merger of two government entities.

It is the considered view of the Ministry of National Security that the process is one that merits reflection and analysis as it can serve as a model for similar undertakings in both the public and private sectors in Jamaica and other countries.

While the ministry had taken note of the various news stories and public commentary about the merging process, we made the strategic decision, in consultation with the leadership of the JCF and the ISCF, not to respond to each story as the evidence available showed that the process was proceeding according to plan, despite the minor hitches reported.

More importantly, we felt that there were valuable lessons to be learnt both by us and others, thus we kept focus on those larger lessons, some of which form the substance of this submission.

The only potentially serious challenge to the process that we encountered was the court action that was brought by the Special Constabulary Force Association (SCFA). The ministry, as would be required, responded to that action and was successful in having the action filed by the SCFA set aside.

It is to be recalled that the merger of the ISCF and the JCF was first recommended in 1991 in the now famous Wolfe Report. Since then, five independent studies have made recommendations concerning the need to pursue strategies to strengthen crime prevention and management through the creation of a single police service. The process that has now been successfully completed began in July 2013, less than a year ago, and was completed in May, 2014 - three months after Cabinet's February 24, 2014 decision.

The outcomes that have been realised are the products of a set of strategies, and the Ministry of National Security wishes to share part of the story of the journey of how we arrived at this important place, not only to respond to some of the comments that have been made in the media, but more important, to offer a reference point for informing how other change initiatives may be handled.

The successful culmination of the process had three principal components which, we submit, largely explain the outcome.

The establishment of a large multi-stakeholder Strategic Working Group (SWG) in July 2013. The size of the SWG was determined by the need to have all stakeholders at the table. This SWG comprised members from the Ministry of Finance, the Office of the Services Commissions, the ISCF, and the JCF, among others, and led by the Ministry of National Security.

The mandate given to the SWG by the minister was that the forces should be readied for a merger in fiscal year 2014-15. The SWG established its terms of reference consistent with its broad mandate. The SWG was subdivided into smaller working groups, each with its own terms of reference. The SWG completed its work in December 2013 and following Cabinet's decision in February 2014, the SWG was reconvened and expanded as the Implementation Task Force (ITF).

One of the critical areas of undertakings of the SWG was that of establishing the reasons for the fact that despite repeated recommendations since 1991, advancing the idea of a merger, the recommendation was not implemented.

The SWG, ably advised by members of the ISCF, learnt that probably the chief such reason for non-implementation of the recommendation to merge was the resistance of its members. This resistance was born out of fear and mistrust resulting from the experiences of 600 of their members who joined the JCF in the 1990s. In our drill-down on the issues, we came to the conclusion that if commitments were given concerning those issues, then we would likely be able to convince the membership of the ISCF to support the policy objective to merge the two forces.

Based on this determination, the SWG recommended to the giving of certain guarantees to the ISCF, and this we consider to have been the winning strategy of the merger. For each area of disappointment, difficulty or bitter memory that was reported in relation to the experience of those 600 members, the ministry agreed to make provision in the terms and conditions of the reassignment of the members of the ISCF (to the JCF) to prevent the recurrence of those disappointments and unpleasant memories

Thus, the instrument of reassignment issued to members of the ISCF by the commissioner on April 7, 2014, which reflected the commitments of the ministry, evoked an overwhelming positive response of members of the ISCF, such that within three days of the issuing of that letter many divisions and units reported levels of acceptance of over 90 per cent, and after two weeks almost the entire membership of the ISCF had signed accepting reassignment to the JCF.

The second strategy was the mission of publicly making the case for the merger by focusing on the benefits to the country and the individuals. The minister, the commissioner of police and the commandant of the ISCF were the chief champions in this area, and each went across the country meeting members, particularly of the ISCF, and explained to them the benefits of the merger.

One of the results of this strategy of continuously communicating the benefits was that in some parishes members of the ISCF were ready to take up their positions in the JCF ahead of May 1. The early swearing-in of the members in St Thomas is a case in point.

Thus, contrary to commentary in some sections of the media that members of the ISCF were being forced, the real truth is that the membership was generally seeking to have the process completed at a much earlier date than the ITF had proposed.

Indeed, it was after a round of consultations following Cabinet's approval that the minister instructed us to proceed to effect the merger sooner rather than later as the momentum for the merger was exceedingly positive. This momentum led to members of the ISCF going to the JCF Stores to collect their red seams even before the commissioner's letter of April 7.

The third strategy which made the merger so successful was the fact that prior to the July 2013 decision to proceed with the merger, the operations of the JCF and ISCF were already being merged functionally and operationally. This was taking place at several levels, including the unification of the training for new recruits and commanders.

The assignment of members of the ISCF into JCF formations. Indeed, in recent years some ISCF graduates have been assigned to JCF formations from they left the training college and have spent all their years there. The fact is that the cultures of the two organisations were being merged long before 2014.

These three strategies account for what we consider to have been a seamless merger and all former ISCF members will be reimbursed, as planned, the cost of having their seams changed.

Dr Canute S. Thompson is the head of the Modernisation Initiatives and Strategic Projects at the Ministry of National Security and the project manager of the ISCF-JCF merger.