Longer wait for cheaper light! No ease on high bills until 2019 … if all goes well, says CaPRI; Government and OUR's inaction hurting Jamaicans in their pockets 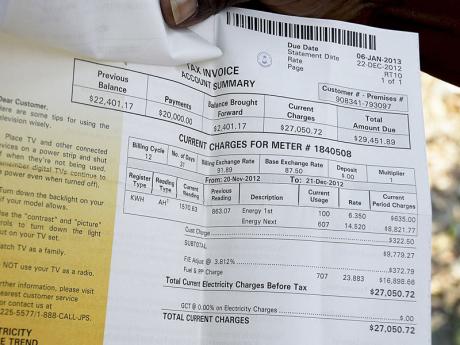 The local think tank, Caribbean Policy Research Institute (CaPRI), is projecting that Jamaicans will not see any significant reduction in electricity rates until 2019, instead of 2016 as projected by the Government.

And even then, the think tank has projected that the rates will come down by 23 per cent and not the between 30 and 40 per cent projected by Energy Minister Phillip Paulwell.

According to CaPRI, while a 30 to 40 per cent reduction in electricity rates is possible, several factors would have to fall in place for Jamaicans to see this saving.

"A 30 to 40 reduction is realistic but only if theft is reduced to somewhere around 10 per cent and the 381 megawatt (MW) plant is delivered in some form," CaPRI told The Sunday Gleaner in response to its just-concluded study dubbed Electricity Prices In Jamaica: Why they are so high.

In the study, CaPRI projects that Jamaicans could be paying US$0.27 per kilowatt-hour (kWh) by 2019, down from US$0.35 per kWh, which was paid on average last year.

"The majority of the reduction (approximately 92 per cent) will come from the 381MW plant. The effect is twofold: one is from replacing the inefficient plants, and the other from the cost reductions from the new plant," said CaPRI.

"Inefficient generators are the main non-fuel-related reason for the high electricity rates, followed by costs passed on to customers from electricity theft, and the JPS's inefficient plants," added CaPRI.

According to the think tank, if JPS system losses are reduced to optimal levels, planned improvements are made to generating plants, and gains are made in the company's operating efficiency, then and only then would Jamaicans see real reduction in electricity rates.

"The retirement and replacement of old and inefficient generating plants is central to efforts of significantly reducing fuel costs, which account for nearly two-thirds of the final price of electricity," said CaPRI as it noted the Government's efforts to replace 292MW of the JPS's older generating plants with a 381-MW combined cycle plant expected to be powered by gas.

"Considering the inefficient generators and the JPS's reliance on crude oil in electricity generation, failures in policy execution and decision making on the part of both the Government and the Office of Utilities Regulation (OUR) that have contributed to the JPS using outdated technology and generating plants are indeed a key contributor to Jamaica's high electricity rates.

"Therefore, the current initiatives being undertaken by the (Ministry of Energy) to reduce electricity rates can only scratch the surface of what is an underlying limitation of the technology, coupled with the reliance on crude oil for electricity generation," warned CaPRI.

The study noted that most of the recent increases in electricity rates paid by Jamaicans have been due to upward movements in price of oil, but added that if the JPS was using more efficient generators it would use less fuel to meet the electricity demand giving Jamaicans a well-needed break on light bills.

"The (JPS) generating plants located in Old Harbour, St Catherine, have been in service for over 40 years … . The reliability of the plants is uncertain in the short to medium term, and high maintenance costs further highlight the need for the proposed new plant to become a reality," argued CaPRI.

The following is a projection of the best-case scenario conditions Jamaicans can expect over a five-year horizon:

4. Average energy demand at peak will increase from 650MW to 680MW by 2019 as the population increases and the price of crude oil remains roughly the same.